2021 Audi S3 Is Quicker and Sexier Than Before, First Review Finds

This week, the all-new Audi S3 Sportback enjoyed its launch, and we just can't bring ourselves to hate it. You see, a top-end Audi Sport model is pretentious, as an RS6 or R8 costs Porsche or even McLaren money. But the Audi S3 has always been aspirational, the kind of car a young driver can hope to one day have. And the toys they fit onto this hot hatch are always what make it interesting.
1 photo
All the reviews have come out at the same time, and according to Carwow's Mat Watson, the new Audi S3 is pretty cool, definitely a rival for the Mercedes-AMG A 35 or the BMW M135i. The highlight of his video is the performance test, where the quattro hatch is timed at 0 to 60 mph (97 km/h) in 4.4 seconds (or less) and 12.82 seconds over the quarter-mile.

Responsible for this performance is a 2.0-liter turbocharged engine that's quite similar to the old one. At 310 PS, it's boasting 10 more ponies than before, but only if you compare it against the 2018-2020 models; the ones before also made 310 PS.

As far as styling is concerned, the S3 is best described now as a "Lamborghini compact commuter." The lines are all sharp, and even the interior has vents and screens arranged in a supercar-like style. However, Audi has lost a little bit of that attention to detail.

If you'd like to sample more of the new S3 Sportback's performance and design, check out the other two videos below. One of them pushes the car to 245 km/h on the Autobahn, which is pretty close to its electronic limiter.

As a side note, it's frankly ridiculous how many variants VW Group can launch at a time. Just in the recent past they had the launch for the Skoda Octavia RS iV (the PHEV), new versions of the SEAT Ateca, Tarraco, and Audi just announced the A3 30 g-tron. 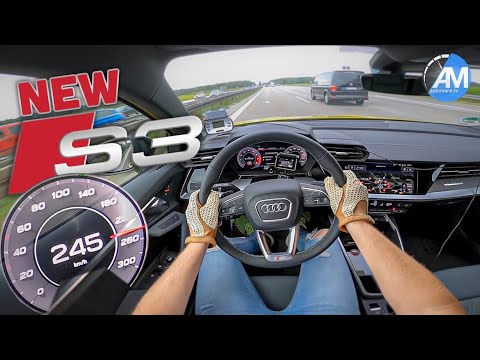