When’s the last time you prepared a meal with no gas, no electricity, or even a fire? The answer is probably never. Through the powers of human ingenuity, technology, and a few mathematical equations, you can now cook your food using only the power of the sun.

Let’s face it, if you’re an outdoor kind of person, you’ve probably found yourself in a situation where you had no possibility of cooking your meals. Nowadays, technology makes that sort of situation a thing of the past.

What you’re witnessing, probably for the first time as I did, is known as the Sizzle. Simple, yet very friggin effective. But, before I tell you about one of the most ingenious ways to cook a meal, a little bit about who is responsible for this trinket.

GoSun is one of those companies that basically comes out of nowhere and seeks to completely redesign the way we live our lives. Ok, maybe redesigning our lives is a bit much, but the fact of the matter is that this Cincinnati-based company is changing the lives of many who live in poverty or near-poverty communities by donating meal cookers like the one you see here.

Now, this team does produce more than just one of these types of cookers, but it’s the Sizzle that showcases the freshest and most game-changing technology the company is capable of.

To make things easier to understand, I'm going to tell you a bit about myself. Growing up, I used to watch lots of MythBusters. In one episode, the team tried to burn ships from a far with nothing more than a parabolic mirror. Guess what, they were successful enough to get the ships smoking.

Well, that’s basically what’s happening here. A massive parabolic reflector takes the Sun’s rays and concentrates them into that central tube. Sound so simple, I could have thought of it. Sure, if I was a rocket scientist. By the way, development was done by GoSun’s lead investor and resident rocket scientist, Glen MacGilivray, according to the manufacturer’s website.

Let’s say you run across this article and decide that you just can't live without something this ingenious in your possession. If you spend the €661 ($795 at current exchange rates) asking price for the grill, out of the box you’ll receive a solar oven, DC power cord, cooking tray, and a user’s manual.

To cook your meal all you’ve got to do is pull out that central tube, load up your veggies and fish, or whatever else you like to eat, open the mirrors, and point this sucker at the sun. 30 minutes and 550 degrees Fahrenheit later, you can enjoy your meal whether you’re at home, by the lake, on the side of the road, or preferably in the desert.

Just kidding about that last bit as the Sizzle even works under cloudy conditions too; it’s considered a hybrid solar cooker. Remember that power cord I mentioned, well, people need to eat no matter the conditions. So, in case you wake up in the middle of the night with a bad case of the munchies, not a problem, if you have a power source.

Overall, the tube structure can handle 145 oz (9 lbs or 4.1 kg) of food, about four to six meals depending on how much you normally eat. With such a massive amount of food, and only a thirty-minute cook time, when’s the next solar cooking restaurant popping up? I open to receiving 1% of all profit you make from the restaurant idea, paid quarterly.

Personally, I feel the idea is absolute genius and was bound to happen eventually. Now that it has, enjoy your meal. 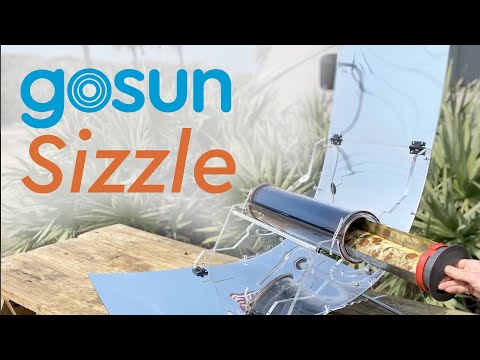 The Biggest of the Biggest: Prelude FLNG, the Largest Floating Edifice of All TimeSee all coverstories