3 Lady in Red Corvette Z06 C7 Wants You to Swipe Right, Would You Show It Your Garage?

5 Corvette C8 Stingray vs. C7 Z06 Drag Race Is Closer Than You Think
Car video reviews:
Up Next

In the GT and Z06 configurations respectively, the Ford Mustang and previous generation Chevrolet Corvette are not exactly direct rivals. One of them holds the hypothetical upper ground in terms of power, though in terms of straight-line performance, they are not that different.
6 photos

Having joined the sub-4 seconds mark for the 0 to 60 mph (0-97 kph) sprint a few years ago, the Mustang GT is about as fast as its ad-hoc challenger from the bowtie brand. The latter needs around 3 seconds for the acceleration, and in ideal conditions, it can run the quarter mile in roughly 10 seconds.

Power-wise, Ford’s muscle car uses a V8, albeit without any supercharging or turbocharging trickery. The 5.0-liter naturally aspirated unit develops 450 horsepower and 410 lb-ft (556 Nm) of torque in the most humble variant, which is much less than the Corvette Z06 C7. The Chevy's 6.2-liter V8 has 650 hp and 650 lb-ft (881 Nm) on tap, a significant advantage over the Mustang GT, which is the most affordable V8-powered version of the sixth-generation Mustang, in case you forgot.

Despite having the power balance tilting in its favor, we wouldn’t go all-in on the Corvette Z06. That’s because it ultimately comes down to each driver’s skills, and how well they know their rides. You already know where this is going, don’t you? If you said ‘drag race,’ then you are right, as the two rather unlikely rivals met at the Mission Raceway Park in Canada, allegedly a few days ago, to put their money where their mouths are. 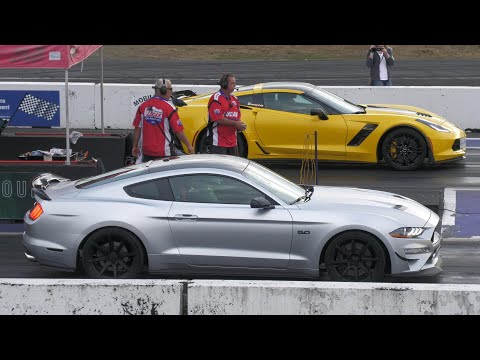