4 Chevy Corvette Goes for the Murdered out Look, and We Think It Looks Stunning

Corvette C8 Stingray vs. C7 Z06 Drag Race Is Closer Than You Think

Is the new-gen Corvette C8 Stingray faster than the old C7 Z06? There’s no better way to answer this question than by pinning the two against each other in a quarter-mile drag race, or two.
7 photos

Believed to be bone-stock, the C8 Stingray and C7 Z06 met recently at the Mission Raceway Park in Canada for a couple of sprints down the quarter mile. And we have to admit that they are quite equally balanced in terms of straight-line performance, as you are about to see.

Now, while the two engaged in a quarrel, Chevrolet is working on the all-new Z06. Believed to launch in 2022, it is currently in the fine-tuning phase. Prototypes have been spotted in different environments, putting the mechanical components to work.

Among them will be a 5.5-liter flat-plane crank V8 that is estimated to push out nearly 620 bhp and 480 lb-ft (651 Nm). The extra oomph, combined with the aerodynamic enhancements inspired by the C8.R racer, will make it quicker than the Stingray, though the top speed could drop to 184 mph (296 kph). 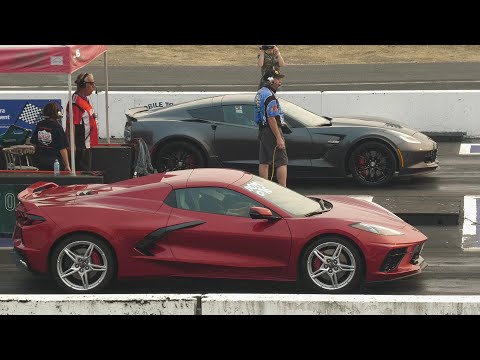