2 The Ultimate Hot Wheels Drag Race Takes Place in a Backyard, It's a 64-Car Battle Royale

The sixth generation of Chevrolet’s top pony contender may be a (very) slow seller these days, but that does not mean it cannot become quicker at handling other tasks, like quarter-mile dragstrip skirmishes. Of course, it might need a little help.
38 photos

Case in point. The videographer behind the Drag Racing and Car Stuff channel on YouTube has prepared yet another short but intense feature from Bradenton Motorsports Park (Florida), centered around a Camaro SS tuned by TGS Racing. The video embedded below (and uploaded on May 10th, 2022) is only a little over two minutes long yet still features a collection of comparable foes.

Usually, the action kicks off with a lighter brawl to make sure we can put the dragstrip hero into the proper perspective. No such thing occurs here, though, as the first skirmish between the 2017 Chevy Camaro SS and an Infiniti Q50 shows us a close encounter of the double 11.47s kind. Luckily, this nail-biting photo finish was easily decided by the winning light, so the Camaro SS narrowly got the victory point.

Next, from the 0:32 mark, comes a Tesla Model 3 to try and show who’s a quarter-mile boss. Alas, people have started to get along with EVs and already know that unless it is a Plaid there are quite even chances for the ICE representative to also come out on top. So, the Camaro SS minds its own business and scores another win (11.32s versus 11.55s).

Then, it is time for a trio of America vs. Import brawls, as TGS Racing’s Chevy twice meets an Audi S4 (at 1:01 and 1:52) along with a BMW M440i Gran Coupe (from the 1:26 mark) that sought to assert quarter-mile supremacy. Well, little did they know, but this traditional muscle car was down for some feisty action that one cool night. 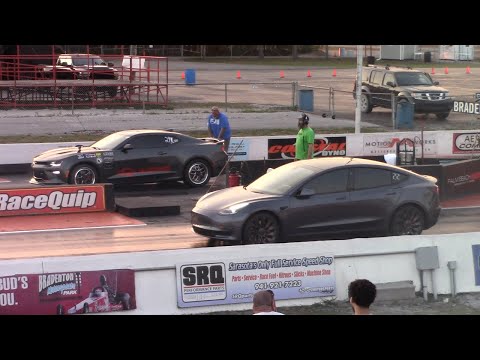