3 This 1,200 HP Shelby Cobra Has a Hardtop, Supercharger Sticking Through the Hood

5 1963 Shelby 289 Cobra Roadster Was Once Served by an All-Female Pit Crew
Car video reviews:
Up Next

Manufactured from 1964 to 1965, the Daytona is an impressive piece of racing history with Shelby Cobra-related underpinnings. The very first prototype was put together in the United States, and five more examples were assembled by a small coachbuilder in Modena, Italy.
25 photos

CSX 2469 isn’t one of those cars, though, but it was built on a genuine roadster from the 1960s. Reconstructed into a Daytona in 1997, this blast from the past was commissioned, owned, and driven by Carroll Shelby.

But that’s not all. When it was a roadster, chassis number CSX 2469 was driven by motorsport legends that include Phil Hill, Derek Hill, Derek Bell, John Morton, and Brian Redman. Offered by Worldwide Auctioneers with an Oregon title, FIA paperwork, and two documents from Carroll Shelby Enterprises, the streamlined coupe was valued at $1.5 million in August 2000. Adjusted for inflation, the original value converts to $2,278,560 today.

A 289 engine is hiding under the hood, but contrary to its name, the motor doesn’t displace 289 cubic inches according to the Historic Vehicle Identity Form. The free-breathing V8 now has 4,868 cubic centimeters or 297 cubic inches thanks to an increased bore, and as opposed to Cobra and Daytona models from days long past, this fellow is outfitted with electronic ignition.

Finished in deep blue and white stripes, this one-off commission is beautified by number 98 roundels on the doors, hood, and rear end. The Daytona Sports Exhaust system, sponsor decals, Goodyear rubber, knock-off wheels, and a spoiler-integrated third brake light pretty much sum up the exterior.

Listed in the Shelby Registry, CSX 2469 was never modified by the current owner. He purchased the brawny coupe directly from Carroll Shelby, and this detail alone is worth a lot of greenback in the eyes of avid collectors. Its true value, however, isn’t known because no estimate has been provided.

If you were wondering, CSX 2601 holds the record as the most expensive Daytona ever sold. Featured in the 1965 movie Red Line 7000 and owned for a few years by Bob Bondurant, that car hammered for $7.25 million in 2009. 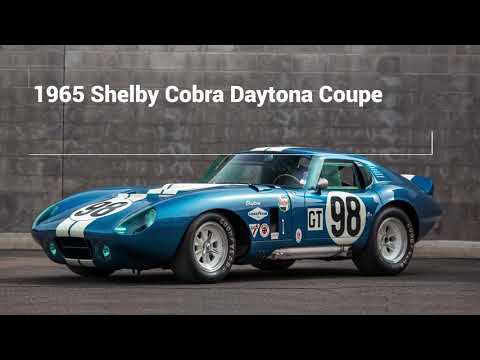