1 Candela Unveils the P-12 Shuttle, an Electric "Flying" Ferry That Can Hit 30 Knots

2 Candela's New Electric Boat Is Like a Ninja on the Water, Starts at Half a Million Dollars

Sweden-based electric boat manufacturer Candela just shared footage of its C-8 high-performance hydrofoil watercraft demonstrating its ability to manage big, ferry-induced wakes by flying over them rather than slowing down.
6 photos

Candela first managed to make the headlines in 2018 when it launched what it claimed to be the world’s first foiling electric boat, the C-7. That watercraft has won awards and became the first hydrofoil chase boat to take part in the famous SailGP sailing competition.

The C-8 was launched last summer as the second model from the Swedish manufacturer and is advertised as a long-range, silent, and fast electric boat, capable of staying on the water four times longer than regular electric boats. To be more specific, the C-8 boasts ranges of 50 nautical miles (57.5miles/92 km) when cruising at 24 knots (27.6 mph/44 kph), although the boat can hit a top speed of 30 knots (34.5 mph/55.5 kph).

In addition to all these benefits, the C-8 has another ace up its sleeve and that is the fact that it can handle the wakes made by passenger ferries way better than a conventional power boat and it owes that to its electric hydrofoil system. According to Candela, the system reduces water friction by 80 percent compared to a planing boat. That translates into smoother rides without having to avoid the wakes or slow down the boat.

When adding the fly-by-wire steering of the C-8 into the mix, which offers instant feedback, the boat makes you feel like you’re driving a racing car, or at least that’s what Candela claims. The highly-acclaimed watercraft starts at $330,000.

The test you see in the video below was conducted in Sweden over a week ago, with the C-8 going against a conventional powerboat. Powered by a 300 hp outboard, the C-8 delivered a smoother and more comfortable ride, cutting through the waves “in a smooth and silent style that only hydrofoils can offer”.

You can take a look at how the C-8 managed the waves in the video below. 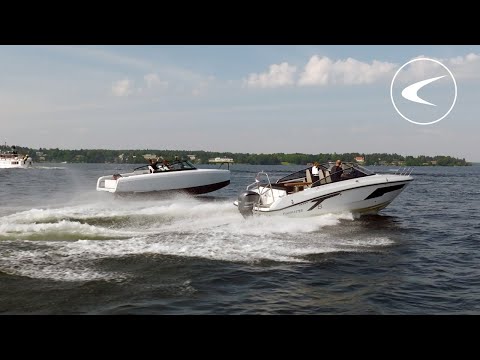