5 Supercharged Mustang GT 5.0 Takes on a Tuned Camaro SS, One Gets Utterly Beaten
Car video reviews:
Up Next

When you’re racing somebody, carrying as little weight as possible with you is a very smart idea. Sometimes, it doesn’t even matter if the weight-saving measures came straight from the factory or if you took out a few “unnecessary” bits yourself, as long as you end up with a competitive product.
7 photos

That is why we found this sixth-generation Camaro so interesting. Aside from running an E85 mod, it’s just a regular Camaro SS, albeit one that’s now missing its rear seats. Granted, that’s not an extreme weight-saving measure, but it should definitely make a difference when accelerating.

The Chevy also has a six-speed manual gearbox, which would normally put it at a disadvantage in terms of shift times, but that’s not an issue here, seeing as how the Shelby GT350 is also equipped with a six-speed manual of its own in the Tremec TR-3160 unit.

Of course, 0-60 times aren’t particularly important when racing from a roll. That is where torque really comes into play, as do the drivers since they’re the ones doing the shifting.

In the end, this was a really close fight, which makes perfect sense when you add up all the variables. 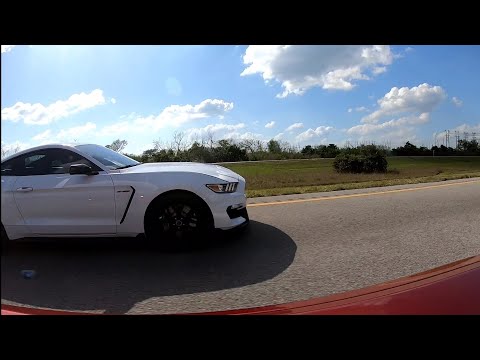