Andrei Tutu
It seems that more and more C8 Chevrolet Corvette owners are taking their toys down the aftermarket path and we're talking about sweeter acceleration times here. Well, with the ten-speed automatic Ford introduced for the 2018MY Mustang, we can say the same thing about pony owners. So, what happens when the two are thrown at each other?
4 photos

We can now answer the question above with the help of what can be described as a pretty basic race, so let's zoom in on this battle, shall we?

For the record, the C8 Corvette's factory ECU hasn't been tuned yet and while certain enthusiasts are throwing twin-turbo kits on their LT2 engines (not always a good idea, as this blown motor shows), this isn't the case here.

As such, the naturally aspirated 6.2-liter V8 of this Chevy only packs custom headers, with its owner explaining the motor delivered around 450 horses at the wheels during a recent dyno session. Even so, the toy features smaller rear wheels, with the meatier sidewalls off the tires making the most out of the balanced weight distribution during violent starts.

Interestingly, the driver of the Mustang GT we have here, namely YouTuber Cnardi91, who caught the whole shenanigan on camera, says his car makes about the same power. And, just like in the case of its opponent, the 5.0-liter V8 animating the Blue Oval toy features limited mods, namely a JLT cold air intake and a Lund tune.

However, it's worth mentioning that the dual-clutch tranny of the Corvette is even quicker when it comes to the shifting game.

Now, you'll see the two slabs of America duking it in a good-old rolling road battle, with this awaiting you at the 4:35 point of the clip below.

Please don't use this as an example and head over to the drag strip when you feel it's time for racing. 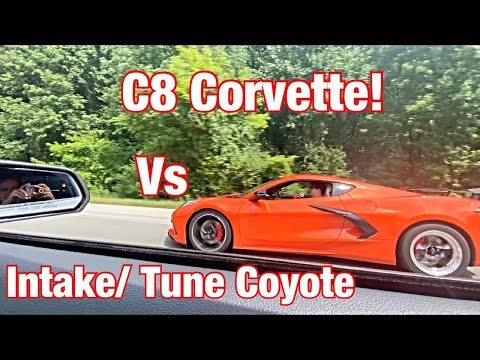