1 Ferrari 458 Speciale Knocks Down Pole, Gets a Black Eye as a Result

3 Liberty Walk's Ferrari 458 Italia Looks Like a Race Car, Until You Step Foot Inside

4 The Ferrari 458 Italia Is an Agile, Timeless Beauty With Firsts and Lasts

5 Misha Designs’ Ferrari 458 Body Kit is Pure Candy For the Eye
Car video reviews:
Up Next

BMW 540i Touring Not Enough for the Czech Police, They Also Got a Ferrari 458 Italia

Home > News > U-turn
26 Jul 2022, 15:58 UTC ·
by Bogdan Bebeselea
In case the news hasn’t reached you, the Czech police are flexing on a lot of police forces across Europe making them feel poor while they ride around in their brand new 5 series BMWs. Now, I should clarify this by saying they only took delivery of 10 models, but that’s still 10 more than other countries.
13 photos

Of course, with the Czech Republic being a fairly wealthy country, German luxury cars could not do the job of projecting fear into the hearts of speeding motorists, so they decided they would need something with a bit more panache. And what car brand out there could be more flamboyant and stylish than a Ferrari?

Luckily, they had a Ferrari 458 Italia on hand and readily available for police conversion. Thanks to the diligent work of the criminal investigators, a lot of cars get confiscated each year from wrongdoers. Shockingly, converting the car only cost the Czech police just a tad bit over CZK 300,000. That might sound like much, but it’s only slightly over $12,000.

The police in the Czech Republic seem to have done an outstanding job in seizing criminal goods and this is confirmed by the Deputy Chief of Police for SKPV, Gen. Tomáš Kubík. According to him, they have confiscated around $288 million worth of criminal property, with over 900 vehicles accounting for a considerable portion of that hefty sum. Keep in mind that a lot of that property is sold in order to cover the damages produced by the criminals.

However, not all cars are sold and some end up being used as police pursuit vehicles (a common practice across the globe). While not all the cars are exotic and luxurious, the Ferrari 458 Italia is and will be used nation-wide. Among its duties, performing supervision on suspected tuner events and combating illegal car races sound the most fitting (hopefully not being left in the dust like the Ferrari in the first Fast and Furious). 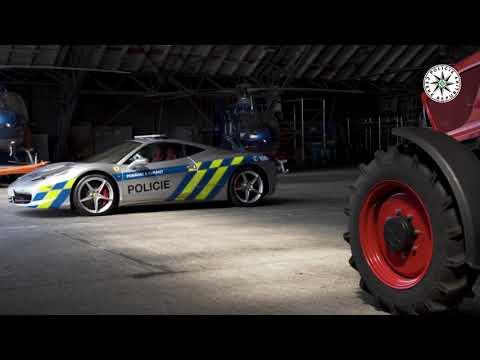