The fourth-generation Pontiac Firebird is well known for its aerodynamic styling. But this particular white-and-black example won’t be able to brag about its low drag resistance. Instead, it wants to take pride in a different kind of drag.
21 photos

The traditional quarter-mile skirmish, of course. But where do we start on this one? A single look at it reveals this is not your average Pontiac Firebird. Actually, this isn’t even common as far as big-block nitrous rides go. And those are pretty crazy, to begin with.

But the tarnished white-and-black appearance hides a true mashup that will probably make the vast majority of people laugh and roll their eyes. The hodgepodge includes LED headlights that look sourced from the cheapest hardware store one can find, as they seem to be taken directly from the backyard spotlight aisle. Then one can’t miss the Air Force jet pod-like contraption that sits atop the big block instead of an actual hood.

And what about the 26-inch Hi-riser wheels that would make any donk blush with envy? For me, though, the real treat that acts as the cherry on top is the recessed rear axle setup... Well, everyone knows that appearances can be deceiving. For example, the owner of the ride tells his friend Jmalcom2004 this is the same engine that was destroyed back in 2015... only now it’s painted black!

Just to show us this is the Firebird’s first return to the drag strip, the engine even hiccups and dies at the 4:40 mark, just as the Pontiac was lining up for a race with a way-too-normal-looking S550 Ford Mustang GT. That one had just the rear tires looking beefier than a stock setup...

Believe it or not, this was a very interesting skirmish. Against all odds, the Firebird had a slingshot start and quickly made a clean break away from the Blue Oval to easily win the race (no ETs or trap speeds were shown). The latter, on the other hand, was in big trouble just yards after passing the Christmas tree... and the battle almost ended in disaster. 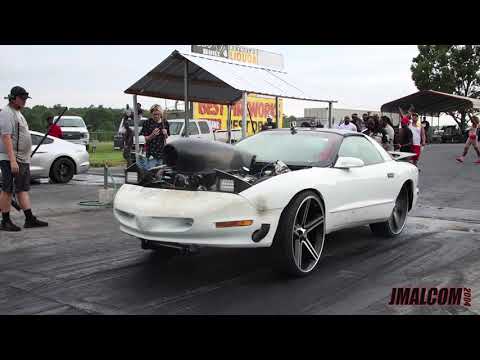