2 Jetone Jet Surfboard Makes Waves at 32+ Mph, Sells for 1/3 of the Price of Its Competitors

Awake Crosses the Sea From Sweden to Denmark for the First Time, Uses Its Vinga eFoil

Swedish electric jetboard manufacturer, Awake, recently fulfilled a company dream, managing to complete the “world’s first sea crossing from Sweden to Denmark on an electric personal watercraft” on a single battery charge and with power left to spare.
8 photos

Awake is a Swedish company based in Malmo and it is an established brand in the electric water sports industry. It has several electric surfboards in its lineup, such as the Ravik S 22 model, which I already covered earlier this year, when it was launched. But the star of the day is Awake’s Vinga eFoil board, touted as a “pure and smooth flying machine that will take foiling to new heights.”

Ever since its inception, five years ago, Awake has dreamed of someday crossing the Öresund strait between Denmark and Sweden, but not just anyhow, but using one of its boards. That dream finally came true recently.

But before you drop your jaw in awe, let’s not forget that Malmo lies on the Öresund coast with Copenhagen (Denmark’s capital) and the distance traveled to get from one country to another was only 27.5 km (17 miles).

The ride started in Malmo, with the rider cruising along the Öresund bridge, and ended in Copenhagen. It was a journey that lasted one hour and 10 minutes, but it was still an impressive achievement, especially given some of the unforeseen obstacles on the way. According to Awake, even though the forecast looked great and the sky was clear, there were still some challenging currents to face, as well as a lot of seaweed and heavy marine traffic that proved to be tricky.

But the Vinga pulled through and managed to complete the 27.5 km voyage with flying colors and without a depleted battery. Which is no surprise given that Awake used the Flex XR battery with extended range and the Powder Wing 1800, also for maximum range. The Flex XR battery claims to offer up to two hours of foiling. According to Awake, the Vinga electric board can travel 35 km (21.7 miles) on a charge, which was more than enough to complete the crossing and still have enough battery life to power the company’s Ravik S22 for an extra joyride in Copenhagen.

Check out Vinga’s journey from Sweden to Denmark in the video below. 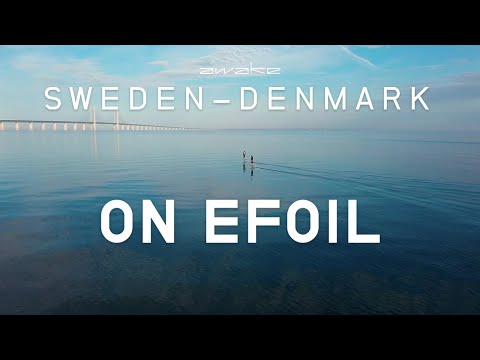