3 Audi And Porsche Will Not Share Electric Vehicle Platforms

While Volkswagen showed many different body styles for its potential EVs, including the now legendary Bulli and later the Buzz busses, Audi is all about crossovers. It seems the Ingolstadt automaker will give the Q4 and Q6 unoccupied nameplates to plugged-in models within about two years.
1 photo
According to a report from Germany's Auto Bild magazine, it will start with the Q4 as early as 2020. The model was already shown as a concept earlier this year, but we're not sure it's possible for it to be ready by next year, considering there are no spyshots.

But maybe this has something to do with the Q4 reportedly being made in China for the local market. It will be based on the VW Group MEB platform, the same as the ID.3, packing two electric motors for a combined system output of 306 HP. However, S and RS models with up to 400 HP are also being considered. We'll know more after the current e-tron SUV gets its performance version.

The modular battery system will allow you to order between 330 and 550 kilometers of range. But that's not as interesting as the fact that up to 20 combinations will be available for the daytime running lights and taillight graphics. It seems Audi has found a new way to make money with options, and it's too weird to be a made-up story.

The occurrence of the Q6 is even more difficult to comprehend, as the current e-tron already seems to fit between the Q5 and Q7 in terms of size and price. But we know Porsche is developing the Macan replacement to be fully electric and Audi apparently wants in on the action.

The Q6 will be large charge, measuring 4.9 meters long and packing almost 600 horsepower in its most hardcore configuration. So from the diesel-powered SQ8, to the RS Q8, Audi will have every kind of go-fast SUV. 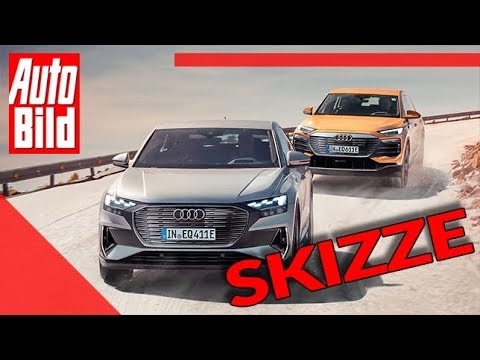