1 Joby Aims to Bring Its SUV-Like Air Taxi to the UK, Has Applied for Certification

5 Archer's Ultra-Silent eVTOL Soars to the Skies for the First Time
Car video reviews:
Up Next

Air taxis are getting closer and closer to becoming a reality, or at least that’s the impression eVTOL (electric vertical take-off and landing) aircraft developers are giving us. Archer Aviation is one of the companies working on putting these flying machines in the sky as soon as possible. The company just announced that it chose to work with FACC to develop its production eVTOL aircraft, with the latter agreeing to supply key fuselage and wing elements for it.
6 photos

Archer chose to work with FACC because it specializes in manufacturing lightweight and high-quality aircraft systems and components and can help ensure that its production air taxi can achieve both its target range and payload capabilities. As explained by Adam Goldstein, Archer CEO, FACC is the perfect supplier for some of the most significant elements in its eVTOL aircraft, thanks to its proven track record in manufacturing advanced composite structures for the aerospace industry, with a focus on safety and innovation.

Archer’s two-seater is called Maker and was unveiled last summer. The California-based company claims it is an ultra-silent aircraft that is 100 times quieter than a conventional helicopter. The eVTOL vehicle completed its first hover flight at the end of 2021.

Maker features no less than 12 rotors, with Archer equipping it with so many to generate less noise. In fact, the eVTOL should be as loud as a fridge, according to its developer. The aircraft has a distributed electric propulsion system so that in case one or two of its motors fail, it can still maintain flight.

With it being designed as an air taxi, it will only be able to cover short distances that are between 20 and 40 miles (32 and 64 km). But it will do so at a top speed of 150 mph (340 kph), with Archer adding that the Maker could make around 40 trips daily. It will initially operate with a pilot on board, but Archer plans to eventually switch to unmanned operations.

Archer aims to achieve Type Certification for its production aircraft in 2024. 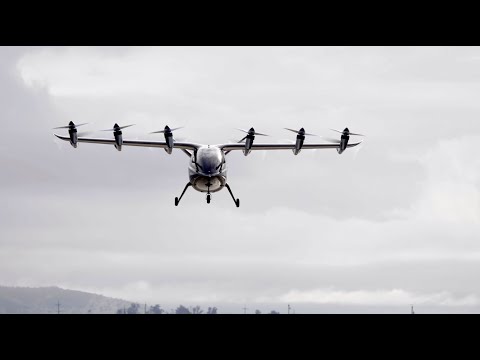