3 Prosperity I Air Taxi Is Ready to Conquer the Urban Sky, Nailed Its Transition Test Flight

China-based eVTOL (electric vertical take-off and landing) aircraft developer AutoFlight is back with fresh footage of its air taxi conducting a test flight, flaunting the latest design, which, according to the manufacturer, is very close to the production version.
9 photos

With decades of experience in air mobility solutions, Chinese company AutoFlight is assiduously working on putting its Prosperity I flying machine in the sky. The company has so far focused on developing cargo drones and this aircraft is its first manned eVTOL. Designed as a flying version of your regular, land-operating taxi, Prosperity I aims to offer a faster and more convenient urban travel solution that can cover both city rides and transfers between nearby cities.

AutoFlight claims that its eVTOL is just as safe as a taxi, but it gets you faster to your destination, without being more expensive. What the Chinese aircraft developer promises is an air taxi that can reduce a trip that takes hours by car to a quick, 10-minute flight.

The company is currently working on the final design of its Prosperity I and the aircraft you see in the video below is the second full-scale proof-of-concept (POC#2). AutoFlight says it looks very close to the production version of the eVTOL, which should be revealed in Q3 of 2022. This flying machine has been consistently tested during recent weeks, with AutoFlight boasting of having completed 30 successful flight transitions alone.

The POC#2 comes with upgrades in terms of lift and cruise configuration, optimized lifting propellers, and enhanced hover and cruising efficiency. In the latest footage released by AutoFlight, you can see Prosperity I owning the sky and confidently cruising above both sea and land. This particular test flight was conducted this month.

Prosperity I is designed to carry a maximum of three passengers plus one pilot. It boasts a range of up to 250 km (155 miles) on a charge and a cruising speed of 200 kph (124 mph). It is scheduled to begin commercial operations in 2026. 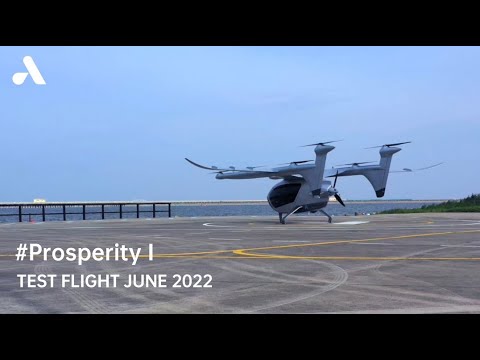