On a global level, Toyota is currently preoccupied with reinventing its fifth-generation all-new Prius ‘Hybrid Reborn’ that will hit certain markets with either HEV or PHEV solutions, and sometimes both.
9 photos

Meanwhile, over in North America, the 2022 Los Angeles Auto Show is about to start, and Toyota is on point with a bZ compact electric SUV that will one day slot below the slightly larger bZ4X. However, some people might rather glance at what the Japanese automaker has on offer on the market right now.

As such, do take a look at its online portal and notice a funny little thing. Most categories have a plural component, like ‘electrified,’ ‘crossovers & SUVs,’ or ‘trucks.’ Just the passenger cars section also includes a lone ‘minivan’ fixture.

That would be the company’s go-to soccer mom or hockey dad MPV, with the 2022 model year Sienna Hybrid going for an MSRP of $35,285 or the 2023MY up for grabs for merely $100 more! That’s quite cheap, come to think about it, especially considering the current state of the automotive industry’s affairs.

Its fourth generation was introduced in 2020 as a 2021 model year after the third iteration was on the market for no less than a decade. Alas, some people might consider the current model has already overstayed its welcome and that Toyota needs to bring out an all-new version as soon as possible, maybe even for the 2024 or 2025 model years. Even if only virtually, that is.

So, here is Dimas Ramadhan, the digital automotive artist behind the Digimods DESIGN channel on YouTube, who has taken up the task of revealing the next Toyota Sienna in full CGI attire. No matter if you consider this redesign as facelift material or ripe for a fully-fledged new generation, do take all this with a grain of salt to not get surprised by the differences compared to the OEM version when the latter does make an official appearance.

Also, it is interesting to note that Toyota’s new design style, already present on the Prius, with ultra-slim headlights, is also used here, lending the big Sienna a sleeker overall appearance. On the other hand, we are not so sure that Mazda will be all too happy to see its signature taillight design on the family minivan. 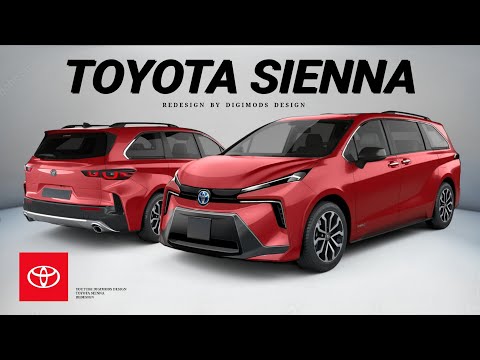