1 Who Needs CarPlay When a Dash Mod Makes an iPad Look Like Factory Equipment?

Bogdan Popa
Apple is believed to be working on an evolved version of CarPlay that would come with upgraded capabilities over the current app, essentially getting access to more vehicle functions.
6 photos

In many regards, this substantially improved CarPlay version would be a rival to Android Automotive, Google’s very own operating system whose adoption is improving slowly in the car industry.

Android Automotive allows car manufacturers to install this software right from the factory, therefore integrating Google services at the OS level. And this means users are provided with more advanced capabilities than what they’re getting from Android Auto, including support for adjusting the climate control settings with a voice command, for instance.

Apple, too, likes this idea, and people with knowledge of the matter said the company is exploring this concept as well. However, the Cupertino-based tech giant wouldn’t launch a new stand-alone product, as Google did with Android Automotive, but only upgrade CarPlay to support new features.

Nobody knows exactly when this project could receive the go-ahead, but what’s even worse, nobody even knows for sure is Apple wants to release it publicly in the first place.

In other words, it’s an ambitious project that Apple is currently exploring, though, on the other hand, there’s no guarantee it ever gets the green light.

In the meantime, there are other ways to boost the capabilities of CarPlay. And one of the most convenient is a custom dash mod.

First of all, what’s a custom dash mod?

In essence, it all comes down to rebuilding your vehicle dashboard in such a way that it can accommodate a tablet, such as an iPad. Doing this obviously isn’t something for the Average Joe, but on the other hand, there are several professionals out there that can do the whole thing for you.

And best of all, these tweaks essentially make it possible to install an iPad in pretty much any car out there. Given the dash itself would be completely modified, some buttons would have to be relocated, but at the end of the day, not only that you’re not losing anything, but you’re getting so much more.

So what are the benefits of having an iPad in your car?

First and foremost, think of it this way: CarPlay is currently limited to select car-optimized applications, whereas an iPad allows you to enjoy the full iOS experience without any restrictions.

In other words, apps like Netflix and CarPlay are also available in the car, though you should obviously watch them only when parked. But they’re there, and they could be a great way to kill some time when waiting to pick up the kids from school.

Then, an iPad offers a much better screen quality and input responsive than the displays installed in our cars. Let’s be honest about it, iPads are high-end pieces of technology, so having them take over your infotainment capabilities is quite a way to upgrade your cabin.

Is it worth investing in a custom dash mod? That’s only up to you to decide, but for people who just want a new-gen experience while driving, an iPad is something that offers so much more than CarPlay.

It doesn’t require an iPhone, it can connect to the speaker system using Bluetooth, and it can even handle your calls and messages. If you don’t want to lose your original head unit, that’s perfectly fine, as custom dash mods can be created with dedicated cutouts to provide access to them when iPads aren’t docked.

So yes, Apple isn’t yet ready to offer an upgraded CarPlay experience, but this doesn’t necessarily mean you can’t enjoy it already. Especially if you have an old iPad laying around your house, that is. 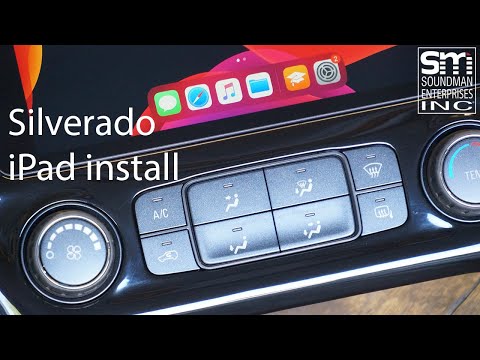