5 2015 Ford F-150 Gets a Custom iPad Pro Dash Because CarPlay Is So Yesterday
Car video reviews:
Up Next

There are many benefits of having a tablet installed in your car. The main one is full access to the entire collection of apps available in the store, so in theory, you’re no longer limited to the options provided by the likes of CarPlay and Android Auto.
6 photos

In other words, if you want to watch a quick Friends episode on HBO Max while waiting to pick up your kid from school, you can very well do this because a full tablet, be it an Android device or an iPad, allows you to install pretty much any app you want as long as it’s in the store.

On the other hand, it’s not a secret that tablet holders are often intrusive and eat a lot of space on the dashboard—or worse, substantially reduce the visibility when placed on the windshield.

That is why custom dash mods are so great, as they allow for the installation of a full tablet in the dashboard without actually turning to a third-party accessory to hold the device.

Soundman Car Audio has built several such dash mods, and his most recent project shared on his YouTube channel is for a 2011 Toyota Tacoma. This time, he installed a large 12.9-inch iPad Pro in the Tacoma's dash, once again with premium quality that makes the tablet look like factory-installed equipment.

The only downside of this build is that the hazard light button is now placed behind the tablet, so in theory, if you need to press it, you first need to remove the iPad.

On the other hand, this dash mod comes with a cutout for a third-party head unit, so you can very well stick with another stereo when not using the iPad. A USB-C connector has also been installed to keep the iPad fully charged at all times, so in theory, once you connect the tablet, you can very well forget it’s there. 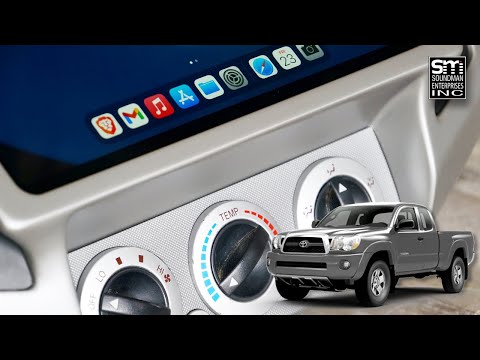