There are many ways to upgrade the infotainment system inside a car, and more often than not, people turn to a new head unit that typically comes with new-generation capabilities, such as Apple CarPlay or Android Auto support, Bluetooth, and built-in navigation.
6 photos

But on the other hand, there are ways to push the whole experience even further, and one of them is to give up on the head unit entirely and go for a fully featured device like a tablet running either Android or iPadOS.

And in theory, with the right skills and tools, you can make an iPad look like factory-installed equipment, and this video published on YouTube channel Soundman Car Audio is just the living proof in this regard.

This new project shows a custom dash mod built for the 2008 Dodge Ram that allows a super-large 12.9-inch iPad Pro to feel like home in this car. The tablet is now fitted right in the dashboard, and thanks to a custom kit, it can slide in and out whenever the driver wants to use it or take the iPad home for updates or things like that.

Furthermore, the dash mod also comes with a dedicated cutout that provides access to the factory head unit when the iPad is not plugged in, so in theory, those going for such a dash mod aren’t losing anything but are gaining so much more.

Worth knowing is that some buttons needed to be relocated to make sense in the new dashboard, but overall, the quality of the build is impressive, and everything looks just like it came from the factory.

Of course, the dash mod can be modified and adapted to pretty much any other tablet out there, so if you like Android more than the iPad, you can very well customize the dimensions to fit a different device, such as a Samsung Galaxy Tab tablet. 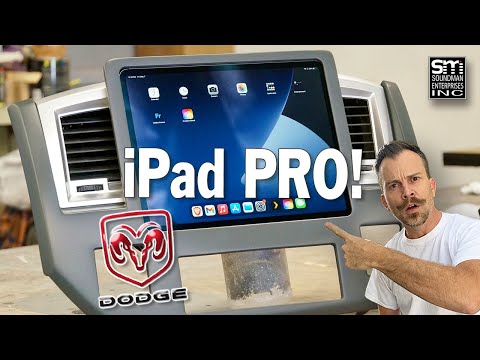