3 Porsche 911 GT3 Gives Its Last Breath in Warehouse, Video Is Agonizing to Watch

Porsche has unveiled its latest 911 GT3 RS, which is more different from the 911 GT3 than you might expect. The German marque's representatives noted that the new model comes with a fully active front spoiler, as well as the ability to change suspension settings on the fly, straight from a knob on the steering wheel.

The new model comes with numerous CFRP elements that reduce the DIN curb weight to just 1,450 kg (ca. 3,196 lb.). Porsche deployed CFRP doors, front wings, roof, and even the front lid from the lightweight material. To save weight, the full bucket seats are standard with CFRP shells.

Despite the weight reduction effort, the model still comes with black leather, Racetex, and a carbon-weave finish for many elements. Customers can order the 911 GT3 RS with the Weissach package or the Clubsport package, as well as numerous other elements that change the look and feel of the vehicle.

Porsche has continued to deploy a naturally-aspirated motor in the 911 GT3 RS, and the latest model comes with a 4.0-liter unit that comes with 525 metric horsepower or 386 kW (517 horsepower). Its output was increased with new camshafts, a motorsport-derived rigid valve drive, and a single-throttle intake system. In case you were wondering, yes, it still revs up to 9,000 rpm. Combined WLTP fuel economy sits at 13,3 liters/100 km, while CO2 emissions rake in at 305 grams per kilometer.

The enhanced motor is mated to a seven-speed PDK transmission with a shorter overall ratio when compared to its 911 GT3 sibling. The transmission has dedicated air intakes on the underbody for optimal cooling on high-speed track days, and it can help the 911 GT3 RS sprint from naught to 62 mph (100 kph) in 3.2 seconds, as well as reach a top speed of 296 kph (ca. 184 mph) in seventh gear.

Stopping the latest 911 GT3 RS is a set of aluminum monobloc fixed caliper brakes that have six pistons each on the front axle, and those pistons are larger by two millimeters each, while the discs they press on are also thicker, while having a diameter of 408 mm (ca. 16 inch.). The rear discs are 380-mm (14.9-inch.) units with four-piston fixed caliper brakes.

Naturally, you can order the vehicle with Porsche Ceramic Composite Brakes, which come with even bigger discs. Forged light alloy center-lock wheels are standard, while the wheel setup is staggered, with 275/35 R 20 tires on the front and 335/30 R21 on the rear.

The new 911 GT3 RS comes with three driving modes: Normal, Sport, and Track. The latter allows for individual adjustment of basic settings, as well as customization of various other settings. The traction control system, for example, has seven different stages before being turned off entirely. Do not do the latter on the street, mind you.

According to Porsche, the new 911 GT3 RS is the best-handling 911 road car ever offered, and they have not made any compromises with it. The company has even eliminated the frunk, so that nobody can ruin the weight balance by placing things in it. Moreover, the front of the vehicle comes with a central-radiator concept, which comes straight from motorsport.

Instead of having three radiators, the new model has just a large one, placed in an angled position in the space where the luggage compartment would normally sit. Since the sides of the front bumper have been freed of their radiators, Porsche was able to implement active aerodynamic elements into them.

The fixed rear wing is not as fixed as you might think, as there is a main rear blade that does not move, along with an adjustable element on it that helps provide up to 409 kilograms (about 901.69 lb.) of downforce at 200 kph (124 mph). When compared to its predecessor, the new model provides twice as much downforce, as well as thrice as much as the current 911 GT3.

Mind you, that massive rear wing manages to cross another barrier, the roof of the vehicle, for the first time on a Porsche production vehicle. Just the upper edges of the rear wing are taller than the cabin, mind you.

The lack of a front spoiler should also be noted, as well as the louvered openings in the front wings that are used to ventilate the front wheel arches.

You might say that this is an aerodynamic specialist's dream car, since it implements so many clever aero elements on a production vehicle with minimal or no compromise. While this is a track-day-oriented vehicle, it does not have any luggage compartment, so there is a small bit of compromise that the owner must make.

Porsche notes that driving at 285 kph, the vehicle's aerodynamics will generate a total downforce of 860 kilograms (about 1895.97 lb.). Another first that was implemented in the new 911 GT3 RS is a Drag Reduction System or DRS, which is a first for a production Porsche that allows "flattening" the wings for a moment at the push of a button to attain a higher speed when desired.

The opposite can also happen, as the 911 GT3 RS can operate an air brake during emergency braking at high speeds, where the front and rear wing elements are set to maximum automatically to enhance deceleration on top of what the wheel brakes allow.

Customers can also get a 911 GT3 RS chronograph, which is made by Porsche's watchmaking division in Solothurn, Switzerland. The watch is more than just a design element that matches the single-lug wheels, as it was COSC-certified for its high accuracy. 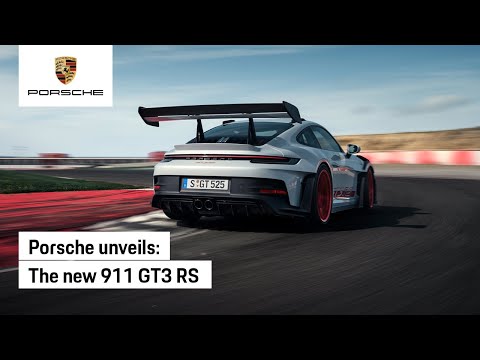