We’ve been shown prototypes thus far, but the Blue Oval has finally teased the front-end design of the real deal. The F-150 EV or whatever it will be called is going on sale in 2022 – most likely for the 2023 model year – and it will be made at the Rouge Electric Vehicle Center in Dearborn, Michigan.
33 photos

The River Rouge Complex is a historical site for the Ford Motor Company, completed in 1928 when Henry Ford was still running the show. This is where parts of the Model T were also produced, but assembly took place at Highland Park. The first automobile made by Ford at Rouge is the Model A.

Turning our attention back to electric trucks, 300 jobs will be added as part of a $700-million investment to the production complex. These jobs will support battery assembly and the F-150 PowerBoost, a hybrid half-ton workhorse that combines a transmission-integrated electric motor with the EcoBoost V6.

Of course, some of those jobs will go to the F-150 EV as well. Knowing the Ford Motor Company and taking into consideration the rising demand for electric vehicles, chances are that more workers will be added in ‘22.

“We are proud to once again build and innovate for the future here at the Rouge with the debut of our all-new F-150 and the construction of a modern new manufacturing center to build the first-ever all-electric F-150,” declared executive chairman Bill Ford, the great-grandson of Henry. “This year’s health crisis made it clear why it is so important for companies like Ford to help keep our U.S. manufacturing base strong and help our country get back to work.”

In regard to what hides under the skin of the e-truck, our best snippet yet is a patent for single-, dual-, and four-motor drivetrain options. It’s hard to guesstimate how many horsepower and torque are in the pipeline, but a prototype has proven the F-150 EV by towing 10 double-decker rail cars containing 42 trucks. Indeed, that’s more than 1 million pounds.UPDATE
Ford has recently published a video of yet another F-150 EV prototype. Ford has also confirmed a dual-motor powertrain for the new truck, adding that we're in for "the most powerful F-150 yet." 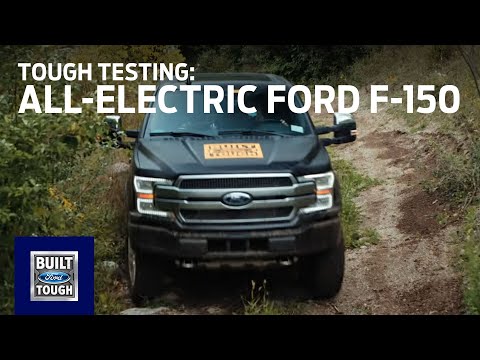