5 1958 Chevrolet Impala Found in a Garage After 30 Years, Looks Ravishing
Car video reviews:
Up Next

2023 BMW i7 Configurator Is Up in Some Countries, Here's How Much a Fully Loaded One Costs

Leaked earlier this month by the General Motors dealer ordering system, the Silverado ZR2 Bison will be revealed sometime in the second half of 2022 for the 2023 model year. The question is, does it really make sense?
35 photos

Against high-performance rivals that include the Raptor and TRX, certainly no. The 6.2-liter small-block will be carried over from the Silverado ZR2 without a big supercharger on top, which is a missed opportunity in every respect if you remember that the truck-based Escalade-V flaunts a blower.

Speculatively rendered by The Sketch Monkey, a.k.a. Marouane Bembli, the off-road pickup isn’t going to differ too much from the regular ZR2. The screenshot from the dealer ordering system confirms Bison front and rear bumpers and skid plates for the rear diff, tank, transfer case, and front end.

Codenamed L87, the small-block V8 in the ZR2 and ZR2 Bison is much obliged to deliver 420 horsepower and 460 pound-feet (624 Nm) to both axles with the help of a 10-speed automatic transmission developed by the Ford Motor Company. Similar to the ZR2, the ZR2 Bison will receive front and rear electronic lockers in addition to Multimatic spool-valve dampers.

First used by General Motors in the fifth-generation Camaro Z/28, the Multimatic Dynamic Suspensions Spool Valve technology proved its merit in the Championship Auto Racing Teams open-wheel series with Newman-Hass Racing. The peeps at Red Bull Racing used them to great success in Formula 1, where DSSV-equipped cars won four titles from 2010 to 2013.

As opposed to traditional shock absorbers, which use pistons and shims, spool-valve shock absorbers employ spool valves. Thanks to clever engineering, DSSVs are soft and compliant under light pressure (think cruising on the road) and firm up quickly under heavy loads (think bumpy trails). 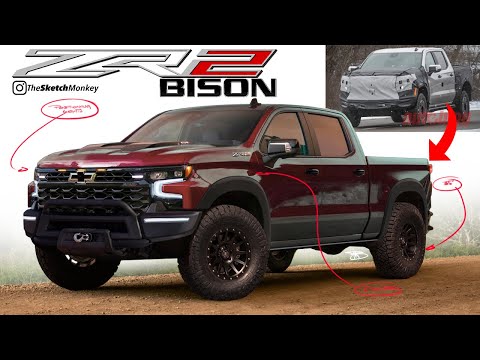