1 2022 BMW M5 Competition Shows What It Can Do, Goes All Out on the Highway

Starlink Terminals May Pose a Risk to Their Users in Ukraine, Experts Warn

Codenamed Bielefeld by the German automaker’s project group, the G81 is right around the corner with slightly wider axles than the M340i xDrive Touring. The M3 Touring story begins with an E46-based concept from 2000, a sporty wagon that was publicly presented by BMW 16 years later.
9 photos

As opposed to the S54 free-breathing sixer in this generation of the M3, the G81 will take its mojo from a twin-turbo sixer. The S58 is available in two states of tune in the four-door sedan, yet BMW is expected to sell the family-hauling model exclusively with the high-performance version we know from the M3 Competition. Given the wheel design of the prototype in the featured clip, it’s all the more certain that we’re dealing with that mill.

Codenamed S58B30T0, the 3.0-liter engine officially develops 503 ponies and 479 pound-feet (650 Nm) on full song. But as it’s often the case with high-performance Bimmers, the force-fed powerplant is slightly underrated. There are multiple dyno videos available on YouTube, all of them showing more crankshaft power and torque than the automaker’s official figures.

Pictured in a very cool shade of gray with a matte finish for extra visual pizazz, the M3 Touring flaunts gloss-black roof rails, a small roof-mounted spoiler, side skirt extensions, and rear valance. We can also notice gloss-black side window garnish as well as two exhaust tips on the driver's side.

More powerful and torquier than the Audi RS 4 Avant, the BMW M3 Touring is pretty much unchanged from its four-door sibling as far as the front fascia is concerned. A good-looking car, as long as you ignore the controversial grille design, the G81 is expected with standard M xDrive.

Introduced by the F90 M5, this all-wheel-drive system is a rear-biased setup that can divert all the torque to the rear axle. 2WD mode is complemented by a few DSC settings, including dynamic stability control turned completely off. If the M3 Touring is all-wheel drive as everyone and their dog expects, then look forward to an auto box rather than a stick shift. 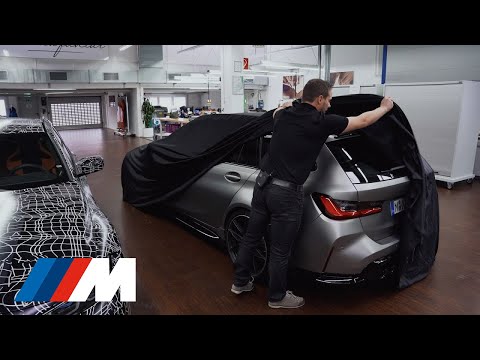