3 For Over $220k, Would You Get Manhart’s BMW M4 or a New Lamborghini Huracan?

Unlike other companies, BMW actually seems to be listening to what its customers want as it prepares the release of a Touring version for its M3 performance model.
6 photos

Whether that's more a move in response to the fact that both its domestic rivals already have similar cars in their lineups (Audi RS4 Avant and Mercedes-AMG C 63 S T-Modell) than genuinely trying to cater to the needs of what must ultimately be a small portion of its customers, we'll never know, but what matters is that an M3 Touring looks imminent.

With the addition of the M xDrive all-wheel-drive system, the decision makes more sense than ever. The convenience of having power sent to all four wheels might be enough to convince some people looking for practicality and all-weather performance to get the M3 Touring instead of, say, an X3 M or something like that. Not everybody likes SUVs, you know, but some people simply need the extra space that you don't get in a sedan.

That's not to say all BMW M3 wagons will have all-wheel-drive, but we wouldn't be surprised if most of the buyers would opt for it, given the chance. In fact, even the M3 Touring in this clip might be sporting the M xDrive system judging by how planted it stays in the corners, particularly when compared to the M3 sedan it shares the track with. Alternatively, it could just as well be the driver that's not pushing it that close to the limit, it's hard to tell.

Performance, however, might take the slightest of dips due to the extra weight and worse aerodynamics, yet the fact you can transport a fridge should more than make up for it. Still, this M3 Touring driver is well aware of the vehicle's limitations when they see a Mercedes-AMG One in the rearview mirror, so they move to the side of the track. However, the One driver seems to be on a cooldown lap because they ignore the BMW's courtesy and continue to admire its rear end, which is something we can totally get behind of. 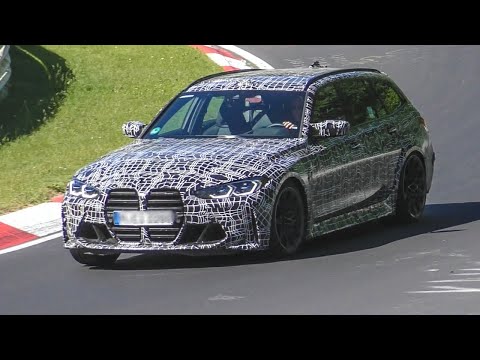