5 Simulators Are the Closest Thing to Actual Racing in Time of Crisis, BMW Says
Car video reviews:
Up Next

The feeling of controlling a vehicle like the ones you see in racing tournaments such as NASCAR, Formula 1, or endurance races, is one of the reasons driving simulators or sim games are such a favorite among all of us. One community, iRacing, is leading the way in as a racing sim.

You may have heard of iRacing before, but if you haven’t, get ready to be introduced to one of the highest regarded automotive simulators out there. Founded in 2004 by Dave Kaemmer and John Henry, this community of gamers, enthusiasts, and downright racing pros continues to grow as we speak.

If you have any doubts about the validity of this sim, don’t, as both owners have an ample racing history behind them. Kaemmer won 19 races in the Skip Barber Racing Championship, while Henry is co-founder of NASCAR team Roush Fenway Racing. That ought to clear up some doubts. Over the years, the iRacing logo has been spotted in NASCAR, IMSA Sports Car Series, SCCA Pro and Club races, and even the Australian Supercar Series. Why are they everywhere? It's that good of a system.

As you would expect from an online racing simulator, access to countless cars, tracks, and events, some of which are organized by the community, allows you to explore racing as very few other simulators do. Oh, and the best part, absolutely everything, from the track to the exterior of the vehicle is a laser-scanned replica of the real thing, so physics and aerodynamics perform as they would on the real car. This offers unprecedented accuracy in terms of force feedback.

Since I mentioned force feedback, iRacing recommends you use a digital wheel and pedal set to get the most out of your racing experience. If you don’t have the cash to get a Logitech G923 Trueforce, you can just use a classic gamepad. Oh, high-speed internet is a must, and so is a computer equipped with one or more USB ports.

Once inside, you’ll also receive 22 tracks, 80 official series to compete in, over 400 private leagues, and even 24 hours of online service and support. Beyond this, a large store where drivers can purchase extra vehicles and tracks is also available, all for an extra buck of course.

Speaking about extra bucks, because the game is officially parented with automakers such as BMW, Audi, Cadillac, and even Ford, you can buy some of the most exquisite examples of these companies works. Oh, McLaren, Aston Martin, and even Dallara are in on the action.

One team, BMW Motorsport, has introduced a new steering wheel for sim drivers that is designed to even be used in the 2022 BMW M4 GT3 car, the real one! You can thank longtime BMW Motorsport partner Fanatec for this tasty treat to iRacing members.

Because of this, members of iRacing can compete in official races and earn thousands of dollars of prize money. If you can withdraw that cash and use it to buy yourself your next meal at Benihanas, you’ll have to read the Terms and Agreement License to find out. I did have a brief look over the document, and some of the details in there are pretty dang serious.

For example, since you’ll be racing with elite and world professionals, iRacing reserves the right to remove a team member from a team if they commit a criminal act, are involved in drug use, and a long list of other motives including extortion. I wonder what the rules are for creating multiple crashes like the ones found in Wreckfest. Probably unsportsmanlike conduct.

If you’re worried that you’ll be thrown into a pit of sharks because you have never touched a racing simulator in your life, don’t worry, iRacing incorporates a licensing system that will keep you racing with drivers within your skill level. To advance you need good safety ratings (so I guess no Wreckfest), so-called iRatings which measure skill and proficiency, and championship points.

Imagine for a second what it would be like to drive a Ford GT GTE, or Audi R8 LMS GT3. Not good enough? How about a Dallara iR-01, not to mention classics like the Lotus 49?

With a growing community, major automakers at play, drivers the likes of Jeff Gordon, and a monthly membership fee that costs less than a movie ticket, just grab yourself a racing wheel and pedals, a decent PC, and who knows, maybe you grab the attention of Ford, BMW, McLaren or Lotus. I'm sure you can figure out a way to get yourself that dinner by playing iRacing. O.K., fine. Here's the scoop. You really can win cash prizes with iRacing so get out there and race! 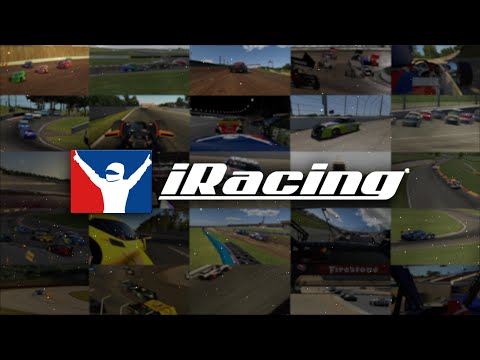