Having been unveiled almost one year ago, the new generation BMW 2 Series Coupe has already fallen into the hands of rendering artists. It’s been imagined in a number of different ways, and one of the latest proposals brings back the Shooting Brake idea.
8 photos

Kind of reminding us of a three-door 1 Series, albeit with a more sloping roofline behind the B pillars, and bigger rear three-quarter windows, the digital illustrations came courtesy of Theottle, who shared a video of the build online that you can watch at the bottom of the page.

Now, as far as the virtual modifications go, these include the longer roof that now ends with a tailgate. There is a spoiler attached to the latter part and roof rails for a more utilitarian look. The window line has been reshaped in order to fit the new styling, and the taillights, bumper, diffuser, tailpipes, wheels, and pretty much everything else carry over from the real 2 Series Coupe, otherwise in the M240i configuration here.

This model remains the range-topping member of the family, until the new M2 debuts anyway. It packs the brand’s twin-turbo 3.0-liter straight-six engine, mated to an eight-speed automatic transmission, and rear-biased all-wheel drive system. With 382 horsepower and 369 pound-feet (500 Nm) of torque bouncing off the walls, the 0 to 60 mph (0-97 kph) sprint is dealt with in just 4.1 seconds. Top speed is capped at 155 mph (250 kph), and the car returns 26 mpg (9.1 l/100 km) combined. 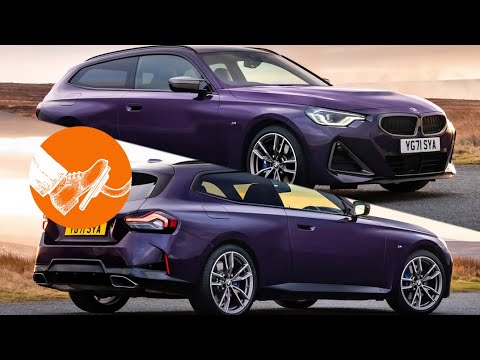