4 A Comprehensive Look at the Legendary Toyota 2JZ Engine

5 You Could Buy 3 New Supras and a Corolla for the Price of This 1998 Toyota Supra
Car video reviews:
Up Next

2020 Toyota Supra With Built 2JZ Guns for Four Digits on the Dyno, Has Old BMW Parts

Ever since the fifth-generation Toyota Supra rumors became more and more frequent, people began wondering if the 2JZ will ever come back. Toyota was well aware of the popularity of its inline-six-cylinder mill and did its best to ensure there would be space for a swap without having to cut the firewall or do other extreme modifications.
15 photos

With that in mind, someone bought a 2020 Toyota Supra and fitted a built 2JZGTE under its hood. According to the owner, Marc, the engine swap only took a day, and the iron block unit fit as if the vehicle was built for it. A massive difference from the BMW-sourced inline-six-cylinder unit is the fact that the 2JZ sits straight up while the BMW motor is slightly leaned.

Since the engine was changed, the vehicle had to get a new transmission as well, and a new driveshaft and differential. While the A80 Supra, which was the previous generation of this model, was available with a manual transmission, made by Getrag, finding one at a reasonable price is difficult these days because of the model's popularity.

Instead, the owner went for a Getrag 420G, which came out of an E46 BMW M3. The same transmission was also available on the E39 M5, as well as on some E34 5 Series models, as well as other BMW vehicles of the '90s, such as the E36 M3. Mind you, each variant of the transmission is made for a kind of engine, albeit a V8, a large inline-six, or a "small" inline-six, so you cannot swap them between models.

The transmission is known in the BMW community for its ability to hold significantly more torque than stock, so it was a prime candidate for being mated in a boosted application. The rear differential is also from a BMW, but this time, it is from an E92 M3. As the owner notes, the gearbox ratios were close to that of the A80 Supra, while the differential's final drive is on point with the car's new specs.

With that behind us, let us see the first guest of the Dyno Everything series from Hoonigan! In the spirit of the show, which was inspired by "This vs, That," you are invited to guess the power of the vehicle before it hits the dyno, and Price is Right rules apply. 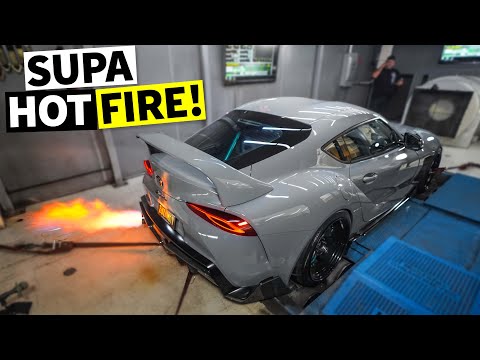