2 You Can Now Have Indians Right at Your Doorstep

5 Appaloosa Race Motorcycle Goes Ice-Skating with Hundreds of Studs on the Wheels
Car video reviews:
Up Next

2020 Indian FTR Carbon Coming Out on May Day

May Day is just around the corner, and this year the world will be celebrating it in an entirely different way than it used to. With billions under some type of lockdown because of the health crisis, the roads will be emptier, parties scarcer, and the overall atmosphere sadder.
1 photo
Looking ahead to a brighter future, and hopefully a not so distant one, people and companies are still making plans for the coming months. For some, those plans might include a trip down a road while riding a brand new Indian FTR.

The American bike builder announced it would unveil the new incarnation of its flat tracker for the street, the FTR. Called Carbon, it will be shown on May 1st on the company’s official YouTube channel.

“Indian Motorcycle, America’s First Motorcycle Company, will reveal a premium addition to the FTR family this Friday with the International debut of the 2020 FTR Carbon. Enhancing the desirability of the innovative model, the FTR Carbon will feature in its own YouTube Premiere at 5 pm CEST on Friday, May 1,” the company said in a statement.

Aside for that, there are no official details on what we are to expect, but the name of the bike kind of says it all, aided by the short video released by Indian (and available at the bottom of this text): we’re probably going to see carbon fiber being used extensively on various parts of the bike.

The video also contains the cryptic promise of a bike that would be as “close as you can get to the three-time championship-winning FTR 750.”

The flat track racing icon will probably be embodied for street use in carbon clothing by a variant of the FTR 1200 model. That’s a bike that was first introduced about three years ago, powered by a 1,203cc engine good for 123 hp and 87 ft-lb of torque. 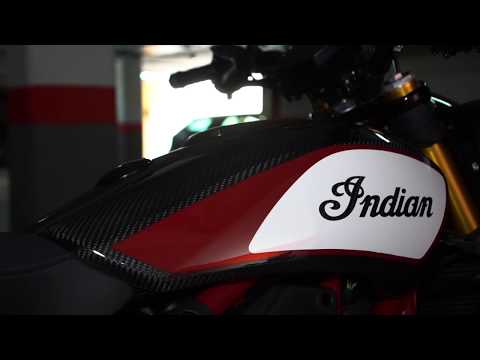