5 You Can Sail on Ice at 100 mph With the Kaira Boat
Car video reviews:
Coverstory

Back in February, when things still seemed right in the world, Indian Motorcycles released the first information about the revised version of the Appaloosa Scout Bobber, and a handful of images showing the motorcycle on location on Lake Baikal.
66 photos

Over the weekend, Indian came back on the subject and released a wealth of new images from Russia, alongside a video showing the exploits of the machine during the Baikal Mile Ice Speed Festival back in February.

Originally built by Indian and Brice Hennebert for last year’s Sultans of Sprint, the bike never got to be properly tested before getting down to business during the first round of the event last year, so a proper testing procedure was developed to test it before the 2020 season kicks off.

The Baikal Mile Ice Speed Festival was chosen because of the challenges it poses, but that also meant the Appaloosa bike itself had to be modified. The biggest change had to be made when it comes to the tires. For the Baikal lake run Dunlop SportSmart Mk3 tires have been chosen, only pierced by hundreds of studs to provide better grip of the slippery surface of the frozen lake.

“Racing on ice is hard, this is the most incredible thing I’ve tried to do. Coming here was a huge adventure for all of us and it was all about challenging ourselves, making new friends and having fun at the same time,” said in a statement Brice Hennebert.

The images and footage released by Indian show more than just what the Appaloosa went through during the Baikal Mile Ice Speed Festival, the little known event that features everything from motorcycles to tracked Bentleys. You can see the entire world that springs into life in the white wasteland in February each year in the video attached below. 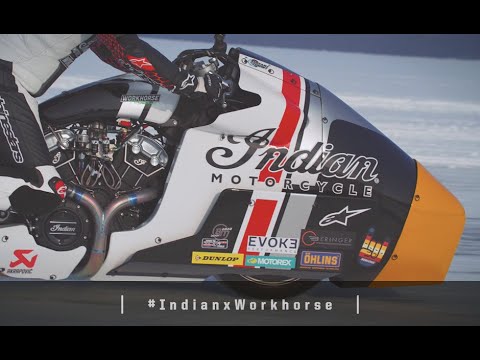