Mercedes-Benz G-Wagen Model Cars Come in All Shapes and Sizes, Will Cost As Much as $900

2020 Audi RS6 Spied at the Nurburgring, Sounds Angry About the S6 Getting V6

Home > News > Spyshots
Mihnea Radu
Audi did say this was the last generation of V6 and V8 engines they were going to develop, but we didn't believe them. Today, out of nowhere, both the S6 and S7 were revealed to have 3-liter TDI lumps.
3 photos

Sure, the powertrain has enough performance for everyday use and is ideal for meeting those EU emissions regulations, but 349 HP in a 2-ton car isn't spectacular. Do you guys remember the 5.2-liter V10 model from 2007? Now that was a beast.

Today's news leaves only the RS6 and RS7 with the V8 engines. According to a previously leaked product plan, both are supposed to come out in the last quarter, though sales might not start until early next year. Ahead of that, Audi Sport engineers took to the Nurburgring today to ruin some more tires.

Even though it's heavily camouflaged, we can see that the RS6 is more aggressively designed than its lesser cousin, the S6. We have a whole new front end with different mesh inserts, geometric air intakes and possibly some carbon.

Down the side, the enlarged skirts clearly are there to match the flared out fenders and extra-large alloy wheels. Finally, the twin oval pipes produce as pleasing soundtrack from what could be the last V8-powered RS6.

It's not yet clear what kind of numbers this 4.0 TFSI will make, though we consider 605 (450 kW) to be the safest bet. The number is lower than the Lamborghini Urus but higher than Bentley's. Crucially, this falls in line with the BMW M5 and Mercedes-AMG E63 S. Rumors suggested a plug-in performance hybrid called the RS6 e-tron would take the place of the RS6 performance. But Audi did say it wouldn't use "e-tron" badges on normal cars.

Expect to see the RS6 either in Frankfurt or at the LA Auto Show. Yes, that's right, America might finally get a hot wagon. 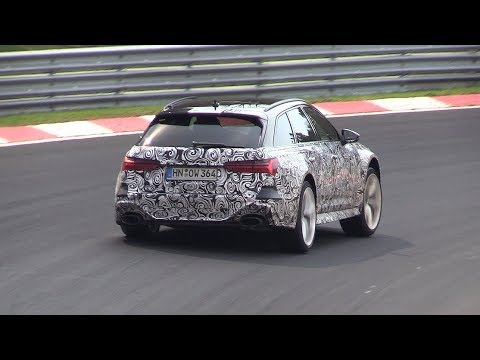