5 2018 Opel Insignia GSi Is Quicker Than Old Insignia OPC At The Nurburgring
Car video reviews:
Up Next

Somebody call Opel and tell them they can lose the camouflage since we all know what the Insignia GSi looks like. "Where from," they want to know? OK, give them some memory boosting pills as well then, because it was them who released a set of official photos to go with the equally official launch.
1 photo
Granted, the Insignia GSi is nothing memorable. Well, at least on paper where the 2.0-liter four-cylinder turbocharged engine sounds awfully underwhelming for a sedan this size, particularly since the old OPC version used a 2.8-liter V6 that also employed the help of a turbo.

However, put the two on the track - namely, THE track and also the one you can see the Insignia GSi lap in the clip below - and you'll get another demonstration of the age-old saying that claims power isn't everything. That's right, the new GSi model is quicker around Nurburgring than the old V6-powered Insignia OPC.

"What kind of sorcery is that?" you might ask, and you'd be entitled to, but here's the catch: we don't know how much faster it is. Actually, we don't even know whether it is faster or not, we just have to believe (the otherwise totally credible) Opel director of Performance Cars & Motorsport, Volker Strycek when he says so.

Without a crystal-clear memory of the Insignia OPC lapping the Nurburgring for comparison, we have to say that this GSi puts on a very convincing show. It may not have the most dramatic score - it is, after all, a puny 2.0-liter engine - but it's got plenty of go. And even if the engine and exhaust sound were better, you still couldn't have heard anything over the awful tire squeals.

At the end of the day the most important thing is that Opel is bringing back the GSi moniker, which means the Insignia is only the first model to wear it. We know that's not going to happen, but wouldn't it be cool if the Germans in Russelsheim also resurrected the Kadett nameplate? I mean, I can't speak for everybody, but I would buy a Kadett GSi for the name alone even if it were completely crap otherwise. 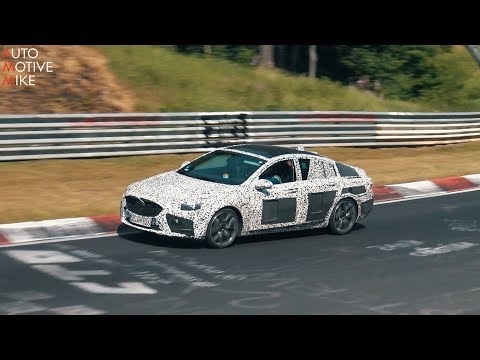