Opel opened a new chapter in the Astra book with the sixth generation of its compact hatchback in 2021.

This time, the car came under new management after Opel joined Stellantis together with its new owners, PSA (Peugeot-Citroen).

Gone were the days when GM was the owner of the Opel-Vauxhall brand, and the new management decided to make some changes to cut costs. Thus, the older Astra platform was replaced by Peugeot's EMP2 platform carried over from Peugeot 308. Also, Astra's sixth-generation was the first to feature a plug-in hybrid version.

The 2021 Astra shows the new Opel Vizor front fascia, first seen on the Mokka, as the central exterior design element. It follows the Opel Compass idea where the vertical and horizontal axes intersect with the Opel Blitz badge in the middle. On the lower side of the bumper, the carmaker placed a broad grille flanked on the sides by a pair of scoops for the fog lights. The car's profile revealed an angular shape with an up-kick for the C-pillar, with the A- and B-pillars blacked out. At the back, the extended downwards roof-spoiler resembled the one installed on the Astra GSI (F-Generation). In addition, the car featured LED headlights, taillights, and fog lamps, depending on the trim level and options.

Inside, the carmaker installed a digital cockpit with a fully-glazed option. The minimalist design of the dashboard and the clean lines of the center console were part of Opel's design philosophy. As the fifth generation, the 2021 Astra featured a pair of AGR-approved seats that offered a comfortable ride and good support for the occupants. In the back, a split-folding bench provided room for three adults. 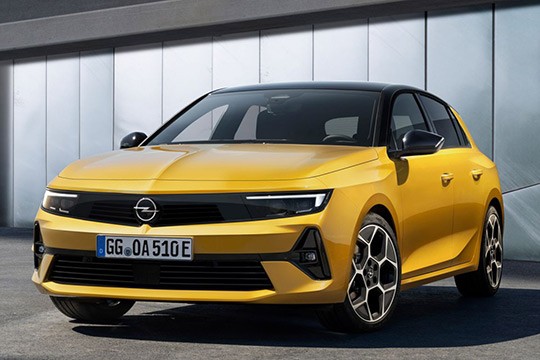