4 A Pure 1972 Pontiac GTO Is Exactly Like a Clean Goat, Hard to Achieve and Maintain

Looks, especially when it comes to classic cars, can easily be deceiving. Take the mid-size Chevy Chevelle for example – a highly successful nameplate that could be had as a family station wagon for when you are never in a hurry… or as a 454 SS coupe for when time is (always) of the essence.
24 photos

Naturally, there were also plenty of options in between, including sedans, convertibles, and small inline-six or small-block V8s. But of course, everyone wants to live the BBC life when securing a Chevelle, or so we’ve heard… Anyway, if a 454ci is all you can dream of, perhaps we found a suitable summer road trip partner.

This 1968 Chevy Chevelle is blue over a black interior but (probably) does not feel sad at all on the account of having just 4k miles (a little over 6,430 km) shown on the odometer and proudly residing in the inventory of Grand Rapids, Michigan-based Garage Kept Motors. It does come with pristine looks, head-turner black stripes, and wonderful chrome details all over, right?

Naturally, the exterior presentation also comes complete with chromed Rallye Wheels shod in Cooper Cobra radial tires to better hint that something is amiss. That would be the muscle car attitude, which is perfectly balanced by the 454ci big-block Chevy V8 engine that is hooked to a five-speed manual transmission.

A few things are modern to make sure the next owner can relax while cruising on the highway and then immediately hammer some quarter-mile passes at the dragstrip by way of an MSD ignition and “slick headers (which) feed into dual exhausts that exit just before the rear axle.” By the way, the interior shows this Chevelle both means business and doesn’t care about originality as much as diehard fans would love to – as new, bolstered bucket seats sit up front, while the original black vinyl bench still resides in the back.

Lastly, there is also a classic Hurst shifter for the modern five-speed tranny, as well as a big Autometer tachometer tucked behind the aftermarket Grant steering wheel. Now, all we have left is the question of pricing: how does $45,900 sound to you? 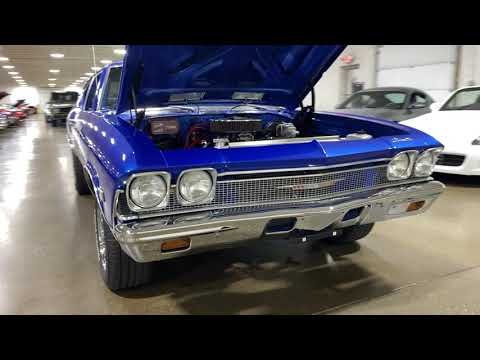