5 Butchered 1964 Pontiac GTO Deserves a Better Fate, Not Really a Walk in the Park
Up Next

A Pure 1972 Pontiac GTO Is Exactly Like a Clean Goat, Hard to Achieve and Maintain

Because the original 1964 Pontiac GTO is widely regarded as the model that started the popular muscle car movement, the series occupies a special place in the hearts and minds of classic Americana enthusiasts. But if you want it to be cheap, then you'd better look at newer model years.
24 photos

The early 1970s were troubled times for the U.S. automotive market – the original muscle car was at its height, but so were newly established Federal safety and emissions regulations. Luckily, this 1972 model year GTO narrowly escaped the impact of OPEC’s reduced oil shipments from 1973 and thus was born just before the massive energy crisis.

That means it has several advantages over later siblings, including the base 400ci V8 engine, even if it featured the new hp ratings, which reduced the pony count from 300 hp in 1971 to “just” 250 hp for the following year. But enough with history as this 77,308-mile (124,415 km) example proudly dwells across the inventory of Grand Rapids, Michigan-based Garage Kept Motors right now, not in the past.

Alas, it does look almost as if it just exited the GM factory’s assembly line some half a century ago – something that is usually hard to achieve and even harder to maintain. This is because the 1972 GTO we are dealing here with was “cosmetically restored and presents well (with) correct GTO stripes and lettering… (while) the tan vinyl top nicely accents the color combination in and outside of this classic muscle car and looks to be original and all the factory trim and molding are present.”

All dressed up in tan paint on the outside, the Pontiac has a nicely complimenting brown interior that only shows its age if you look carefully and from not too far away. It also features its highlights, such as the 1980's era Kraco cassette player and rear speakers, along with power steering and power brakes, which should be great for cruising along with this classic muscle car.

As for the asking price, that one is interestingly medium-sized, at just $39,500 – which begs the question: is it a ruse or is there a big catch? 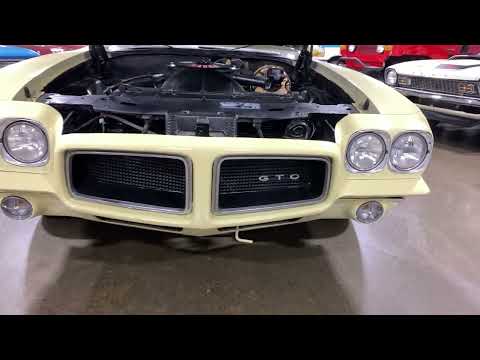