1 Unexpected Engine Swap, But This E30 BMW Does Have the Proper JDM / Euro Flair

5 1969 Chevy Camaro Revisits Detroit Speed for Upgrades, Is Out on Pleasure Cruise
Car video reviews:
Up Next

Back when Chevrolet produced the Chevy II model – affectionately called Nova irrespective of the generation – it had to return to the bare basics in order to compete with compact rivals such as the Ford Falcon. Now, do you think the creators of a very conventional car with a 110-inch wheelbase would consider it for a custom project that includes throwing inside some 750 horsepower... and skinny rear tires?!
65 photos

Doesn’t matter if you answer the question or not, it was rhetorical. That’s because the project already exists – as it came to life during this year’s troubled period as a pet build for Jon Henson, the Sales Manager of none other than Currie Enterprises.

Of course, with the company (founded back in 1959) being one of the most recognized names in the custom rear end and drive-train products segments, there’s no surprise that Jon’s project hides its own secret Currie part (jump at the 8:30 mark if you don’t have the patience to let the story unfold).

Seen here alongside Shawn, the host of the AutotopiaLA YouTube channel, the 1965 Chevy Nova II actually started life as a car that was acquired for the current owner’s best friend – only to remain in Jon’s custody more than intended and go through all these... small changes.

These include ripping the engine, transmission, rear end, as well as the interior – among others, as the owner already had prior experience with such custom projects after previously owning a little shop. No wonder he came out with a boosted monster that would make any pro-touring enthusiast immensely proud.

And that’s not only due to the new BluePrint LS3 6.0-liter crate engine dropped under the vented hood (with that Magnus Motorsport 2.3-liter there’s a lot of heat going on down there) for 750 hp at the crank (and some 630 hp at the tire, according to the dyno).

It’s also because of the unique touches this build has – for example the “New Gen” 18-inch alloy wheels were created by the owner itself (a self-appointed wheel gearhead), or the huge stereo at the back that caused the use of 255 tires at the back... Yeah, obviously there’s not a lot of traction, so there’s ample space for burnouts or quick annihilation at half-throttle!

We do get to see the host driving (from the 9:05 mark) this jewel – which even has a matching interior to the owner’s most beloved shoes – but if you want to hear about the suspension, exhaust, or that exquisite custom spoiler do check out first the 5:20, 6:35, and 7:20 marks, respectively. 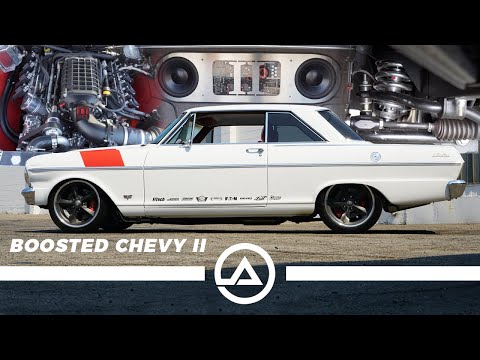