3 The Most Powerful Pagani Ever: 2020 Pagani Huayra Imola Packs 827 PS

This story puts an entirely new spin on the old “I dented my parents’ car” story many of us probably lived back as teens. A 17-year-old YouTuber crashed and totaled his father’s one-off Pagani Huayra Roadster.
9 photos

Some hours ago, videos on Instagram and Facebook started making the rounds showing a purple Pagani Huayra Roadster wrecked on a road in Dallas, Texas. The Drive reports that the car belongs to local billionaire Tim Gillean, a social media celebrity in his own right, but was usually driven around by his son, the 17-year-old YouTuber mentioned above: Gage Gillean, who goes by GG Exotics on the platform.

Indeed, a single look at his channel shows him taking the Pagani out on a number of occasions. His videos are typical “influencer” fare of the worst kind: he and his bros are usually larking it up by the pool, cracking silly jokes and taking cars out of Gillean senior’s impressive fleet out for rides. The content mostly feels staged but at least Gillean is not dissimulating in any way the purpose it should serve: him showing off. For what it’s worth.

And then, there are several videos in which Gillean junior is shown driving the Pagani and apparently speeding. As of the time of press, there’s no indication that speed was a factor in the crash but, based on the damage to the car, it’s likely. As the video below shows, the Roadster was ripped apart, with the front wheels coming off, the airbags deployed and there was carbon fiber debris scattered all along the road.

Dad’s garage also includes a Bugatti Chiron, a McLaren Senna, a Ferrari LaFerrari, a Lamborghini Urus and a Rolls-Royce Dawn, and the Pagani, though a 2018 model, was just acquired in June 2020. It was a one-of-one model decked in purple carbon fiber estimated at $3.4 million and, as you can see in the gallery, a true piece of automotive art. Sadly, neither dad nor teen son had that much time enjoying it, thanks to the son’s probable recklessness.

The Drive notes that Zackxak, another content creator, was also in the Pagani when it crashed, and he’s been telling his followers that both he and Gage walked away unharmed. He doesn’t say what caused the crash. 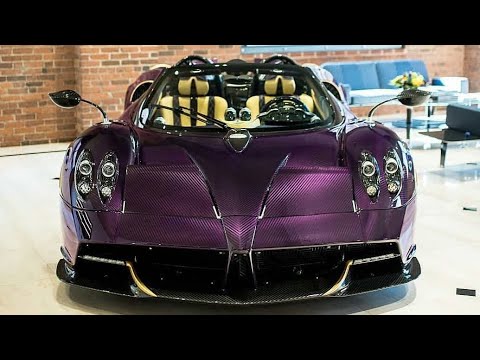