The 2014 MY Moto Guzzi V7 Stone is a minimalist classic cruiser, that also offers all the perks that come with modern technologies. The designers from Mandello del Lario have chosen a cafe racer style, and the 2014 MY has a more aggressive approach, with most of its chrome finishes being replaced with blacked-out accents, except the engine accents and the exhaust system.

At its heart lies an air-cooled, four-stroke, 90-degree V-twin powerhouse paired to a five-speed manual transmission, and can produce 50 horsepower and 58 Nm of torque. It is suitable for both younger riders, as well as the more nostalgic among Moto Guzzi fans, its design remaining more or less unchanged since the 80's. 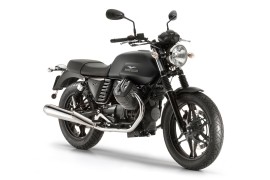