A splendid tribute to the old-school Guzzi machinery, the 2011 V7 Racer brings forth all the glorious looks of a special edition bike, retaining the full Mandello attire and the spirit of the 70's, though this time backed by modern technology. Classic to the bone and looking even better than the original, thanks to the updated color scheme, the 2011 V7 Racer can be ridden on a daily basis.

With comfort being considered just as important as the handling and engine character, the new V7 takes classic bike-making to the next level. The traditional transverse V makes mistaking this bike for anything else impossible. Classic by looks, the 2011 Moto Guzzi V7 Racer is all-new by mechanics, and rides like a dream. 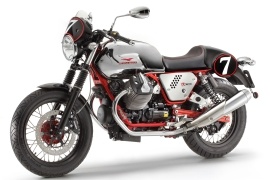