Ever since its first-generation, Focus provided a sportier version named ST.

Later on, an RS version with more ponies under the hood and race-inspired technology took the flagship role.

When Ford updated the fourth generation of the Focus in 2020, it couldn't leave the ST version aside. Even though the car was not fuel-efficient and the carmaker had to deal with European penalties for that. It was built because a flagship model was needed. Something to brag about. And thus, the Focus hot-hatch returned as a different kind of animal in the Focus stable.

There is an important change at the front fascia, where the carmaker installed a black honeycomb grille that sported the Ford badge in the middle. It was flanked by the LED headlights with an option for Dynamic Pixel LED lamps. The foglight was also included on their inner side. Its daytime running lights were converted into turn signals when needed. From its sides, the 18" light-alloy wheels were standard, with an option for a 19" set sported a unique design for the ST version.

Ford bragged about their in-hose designed and developed front sport bucket seats with high bolstering for the interior. They were made for excellent lateral support during high-speed cornering. With its TFT display instead of analog dials, the ST version tried to ditch the older gauges but provided more information for the driver. A 13.2" large infotainment display that featured the SYNC4 system sat atop the center stack.

Under the hood, the carmaker installed the same 2.3-liter powerplant mated to a six-speed manual gearbox. Yet, a seven-speed automatic (dual-clutch) was on the options list for those who didn't enjoy the three-pedal setup. 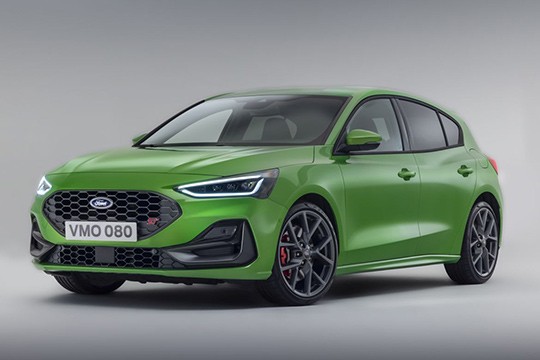