Ford made the Focus Active Wagon as an alternative to classic station wagons.

It provided more ground clearance while it kept the same fuel-efficient engines.

With its vertical slats, the grille sported the blue-oval badge, which moved there from the hood as on the non-facelifted version. An important upgrade was for the headlights, which were LED for the entire range. It marked a big step forward to modern-era cars. The daytime running light pattern was moved inside the headlamps and encircled the darker central section. In addition, the carmaker tried to mix the classic station wagon bodywork with an SUV-inspired stance and parts for the Active Wagon version. Thus, the crossover featured black, unpainted plastic parts that underlined the lower side of the bodywork. In addition, a satin-chromed shield peaked at the lower part of the front bumper and was complemented by a similar-looking underbody protection element under the rear bumper.

For the interior, Ford focused on the technology department and installed the SYNC 4 infotainment system. It features a new 13.2" touchscreen placed atop the center stack. Unlike other carmakers in the compact, mass-market segment, it provided more features, including voice commands for accepting calls and navigation and controlling the audio and climate control systems. Since it shared the same bodywork with the station-wagon version, the Focus Active Wagon provided a 608 liter (21.5 cu-ft) trunk, which the user could expand up to 1,653 liters (58.4 cu-ft) with the rear bench folded. 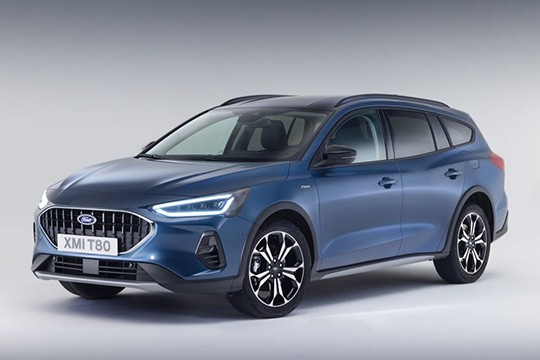