In 2018, Ford dropped the five-door Fiesta ST and kept only the three-door version, which was a better competitor for other pocket-rockets on the market such as Mini Cooper S or, in Europe, Renault Clio Sport.

Ford tried to make a sportier version for the Fiesta ever since the first generation, but it wasn’t until the fifth generation when it succeeded in introducing a true, performant version for it, named ST.

The 2018 model was part of the seventh generation which Ford introduced on the market in late 2016. In 2017, the blue-oval brand launched the ST version with three and five doors but starting with 2018, it kept only the fewer doors version. It sported an aggressive styling with a hexagonal pattern on the mesh-grille at the front, adorned by the red ST badge on the left lower corner. In the bumper, Ford’s designers placed an additional grille to cool the intercooler and a set of side-scoops that hosted the fog lights. A set of 17” light-alloy-wheels was fitted as standard, while a set of 18” was on the options list.

Inside, the carmaker garnished the cockpit with sport-inspired trims and a standard SYNC 3 infotainment system. The Recaro sport bucket-seats featured high-bolstered areas to prevent their occupants from sliding during high-speed cornering. A thick steering wheel with 12-o’clock stitching amplified the sport sensation of the car.

From a technical point of view, the 2018 Fiesta ST was the first that featured a Quaife limited-slip differential (LSD). That helped the car in corners and made it faster around tracks. In addition, its 200 hp engine paired to a standard, close-ratio, six-speed manual made it an excellent track-day car in its class. 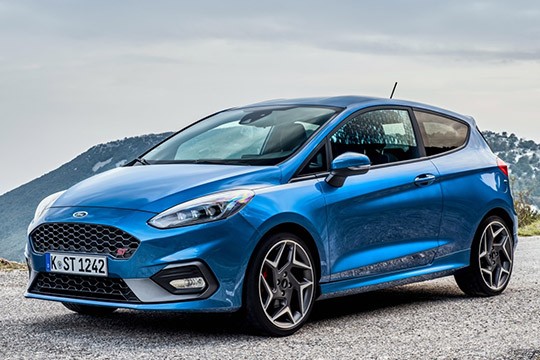 3 Buried Alive 1967 Mustang Fastback Found in a Barn After Decades, Has the Full Package