Ford refreshed the Fiesta Active model in 2021 and enhanced its drivetrain with electrified versions while it dropped the turbodiesel engines on the way.

In 2017, Ford introduced the seventh generation of the Fiesta lineup and added a crossover version named Active. The carmaker tried to compete against the market leader Renault Captur, which was also based on a small-segment vehicle, the Clio. Five years later, the blue-oval brand added a well-deserved facelift for the entire Fiesta range, including the Active version.

Regardless of the technological improvements, a carmaker has to upgrade the exterior of a refreshed car, and Ford knew that. The most striking innovation was on the front bumper, which received a new, L-shaped set of trims on the side scoops. Since the carmaker added the Matrix-LED headlights, the overall front look of the vehicle showed a bolder stance on the road. In addition, its grille featured vertical slats instead of the mesh design used for the 2017 model year. At the back, the carmaker offered the Active with an option for LED taillights.

Changes continued on the interior where Ford installed a 12.3” digital instrument display, which replaced the former analog dials. Atop on the center stack, Fiesta Active featured the same infotainment system as its non-facelifted version.

But the most significant change was under the hood, where Ford dropped the fuel-efficient turbodiesel engines. Instead, it replaced them with new, mild-hybrid versions with a 48-volt architecture that complemented the regular, inline-three gasoline powerplants. 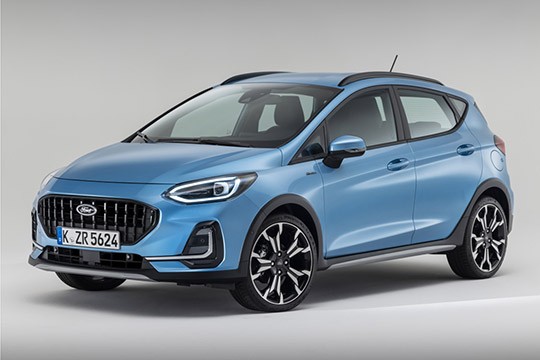