Ford refreshed the fourth generation of the Expedition lineup in 2021 for the 2022 model, adding some changes here and there while removing some other features.

The carmaker built the Expedition with family needs in mind ever since the first generation, which appeared on the market in 1996. By 2018, when it launched the fourth sequel of the full-size SUV, the car was more or less an expensive luxobarge built to tow campers, boats, and other trailers for family activities.

For the 2022 model, the carmaker noted its customers' preferences and added some changes. On the outside, the main changes were for the paint, where it deleted the Blue and Gold colors, replacing them with the Antimatter Blue and the Kodiak Brown ones. In addition, since the Expedition had to cope with various demands, from off-roading to trailer hauling and family trips, Ford provided the vehicle with a wide option of wheels ranged between 17" and 22" in size.

Ford also tried to answer better to its customers' demands when it made the 2022 Expedition available in 13 equipment groups. Despite an increasing demand for comfort, the carmaker deleted the conversation mirror from the overhead console. In the safety department, the carmaker worked on the Ford Co-pilot360 Assist and offered it as standard on the Limited version. In addition, an 8" LCD Capacitive Touchscreen with swipe capability, Android Auto, and Apple CarPlay was included in the STX package.

The main differences on the drivetrain were for the Electronic Limited Slip Differential (eLSD), which was removed from the Heavy-Duty Trailer tow package and introduced as an option for the rest of the range. 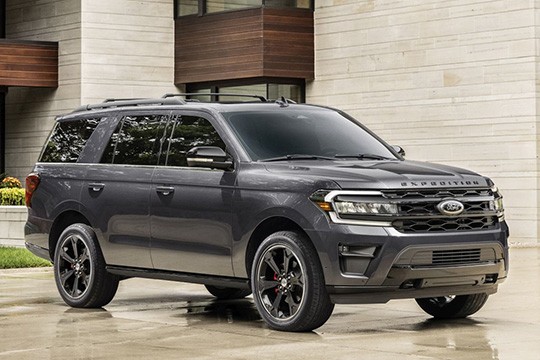