5 Toyota Details 2021 Mirai for the U.S. Market, Arriving at Dealers Next Month
Car video reviews:
Up Next

Would You Drink Exhaust Water From a Toyota Mirai Hydrogen Car?

Drinking anything that's supposed to go into a car is a stupid idea. You might get sick, die or change into Car Man, the gas-guzzling superhero. However, there is one potential exception, the Toyota Mirai, a car that runs on electricity produced by a hydrogen fuel cell.
4 photos

Even before Tide Pods and gluing your hair, automotive journalists were trying out this slightly crazy challenge where you drink the exhaust from a Toyota Mirai. If our research is right, the first guy to do it was journalist Vadim Ovsiankin back in 2015, during the first-gen car's launch event. Of course, fuel cell cars were around before Toyota made one, so it's possible that somebody did it before.

Now there's a brand new generation of the car, and it's different in many ways. The old one looked like a fancy Prius, but this one is shaped like a Lexus GS, and it even rides on an RWD platform. However, the bit we're interested in hasn't changed, as the only exhaust byproduct is supposed to be water.

There are other hydrogen cars out there. Honda Clarity and the Hyundai Nexo come to mind, though they're both also offered as more conventional rechargeable cars. Getting back on track with the subject of this story, we found another YouTuber thirsty-enough to drink from a Toyota.

The video is, unfortunately, difficult to follow because it's in Polish. But you can see the stunt happening roughly at the 4:50-minute mark. Just like with the old model, there's a button on the dash that says "H2O." Press it, and water begins to come out of a pipe, which has been relocated just ahead of the back axle.

If we were in Toyota's shoes, we'd make it so the water can only come out while you're driving, thus stopping people from drinking it. On paper, it's just hydrogen and oxygen cells mixed together, but you know how people are about suing giant corporations, which don't come a lot bigger than Toyota. Let us know if you'd be willing to try a stunt like this in the comments. 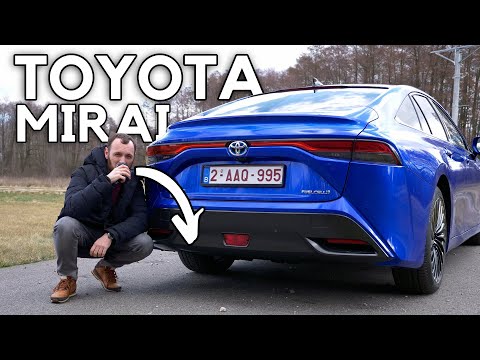