5 World’s Largest Iceberg Spotted, Global Warming Might Have Nothing to Do With It
Car video reviews:
Up Next

Uncrewed, sustainable research vehicles are proving to be even more capable than traditional, large vessels. An apparently small, but mighty autonomous vehicle that is prepared to disrupt other sectors as well, not just maritime research, has successfully completed its maiden voyage.
8 photos

The large ships that have been always used for maritime research are expensive to build and to operate, which inhibits ocean exploration, instead of supporting it. But new technologies are revolutionizing this field. California-based Saildrone has just demonstrated the outstanding capabilities of the only vehicle in the world that can perform uncrewed ocean mapping operations, in long-endurance missions.

With a 72-foot (22 meters) length and weighing 14 tons, the Saildrone Surveyor is much more compact than a standard research ship, much better for the environment (since its mostly wind- and solar-powered), but able to deliver data of the highest quality.

During its first expedition trip from San Francisco to Honolulu, which lasted 28 days, this autonomous vehicle managed to map 6,400 square nautical miles of seafloor and sailed for a total of 2,250 nautical miles. Its highly-advanced sensors are able to map the seafloor in high resolution, even at a 23,000 feet (7,000 meters) depth. Plus, because it’s powered by the wind, this unmanned vessel is also quiet enough to obtain very accurate acoustic measurements.

Built with a patented wind propulsion system, the Saildrone Surveyor is able to cover large distances, with a maximum speed of 10 knots, and also has incredible endurance – it can stay at sea for up to 12 months, without needing refueling or maintenance. During its missions, the Surveyor is constantly supervised by a pilot via satellite, but it’s able to navigate autonomously. And, to make sure it operates safely, it also features navigation lights and a radar reflector.

This autonomous research vehicle seems to bring only advantages. It’s much more cost effective than standard survey ships, it reduces the carbon footprint, and it provides high-quality data for maritime research, helping us find out more about the vastness of the ocean, which is still mostly unexplored.

After such a successful first voyage, the Saildrone Surveyor’s technology could be adapted for other applications as well, including homeland security and defense. 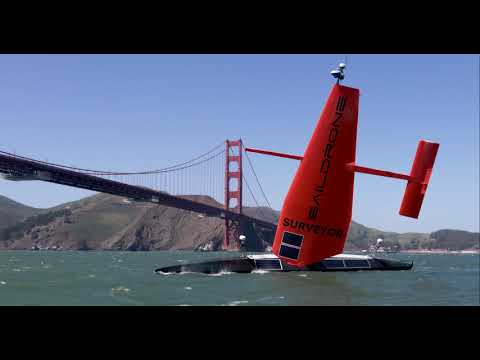