1 One of the Royal Navy’s Oldest Frigates, HMS Argyll Is Still a Leading Warship

3 Mod-1 Spearfish Torpedo on Its Way to Underwater Supremacy, Doesn’t Hold Back

5 Scottish Maritime Museum Debuts Gender-Neutral Ships, Gets in Major Trouble
Up Next

The Forgotten Story of the JDM-Spec, Affalterbach-Tuned Mitsubishi Galant AMG

Home > News > Military Bits & Pieces
Otilia Drăgan
The Royal Navy now has a complete autonomous minehunting system – the third and final boat that will be capable of conducting unmanned minehunting operations has just been delivered.
6 photos

RNMB Hebe (named after the Greek goddess of youth) is the Royal Navy’s latest autonomous boat, part of the Project Wilton, which was meant to develop crewless minehunting vessels and technology. Now, the 3 “sisters”, Hazard, Harrier and Hebe, will be in charge of future mine detection missions.

Hebe is not only the longest of the 3, but also the one to have even more on board technology. A 49-foot (15-meter) long Vahana boat, Hebe has the most advanced command, control and communications capability. She is able to control another one of the vessels, Harrier, and to operate a towed sidescan sonar for mapping the seabed.

What exactly can these 3 sister-vessels do? Well, their main job is to detect and classify mines, and they’re able to do that autonomously, remotely or manually. This means that they can operate uncrewed, or that mine countermeasures experts can control the vessel either on board or from a ground-based remote center.

You might not be aware of this, but mines left over from the Second World War (historical ordnances) are still a threat, and the Royal Navy has been one of the most active participants in minehunting operations across the world. As part of a wider Maritime Mine Counter Measures program that was launched last year, the Royal Navy also developed a towed sonar and mine neutralization system. Together with the new autonomous boats, they represent the Primary System.

The autonomous vessels and the next-generation technology system are designed to replace the Hunt and Sandown class ships, which are the conventional ships that have been used for mine detection so far.

Delivered at the Clyde Naval Base, the RNMB Hebe will now enter a trial period, together with Hazard and Harrier, before the autonomous fleet’s first operation.

Project Wilton is part of a complex effort of the Royal Navy to integrate autonomous vessels into its fleet. Earlier this year, the Madfox autonomous boat (Maritime Demonstrator for Operational eXperimentation) for surveillance and protection, was also tested. 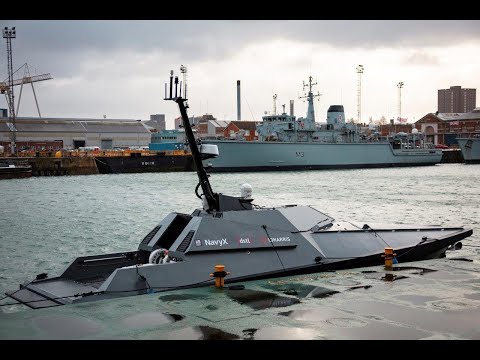