1 Porsche's eFuel Is Not for the Future: It Means to Keep the Past Running

Forget classic superyachts and eco-friendly cargo ships – this new vessel wants to turn heads with real live shows, performed while it’s sailing away with the help of a modern sailing system. An unusual project that’s brought together players from several European countries, this pioneering sailing ship will blend sustainability with art in a unique way.
7 photos

Wind power is one of the clean energy sources that’s being “reinvented” these days, with the added benefits of modern technology. One of the major programs for transitioning the maritime industry to more sustainable alternatives has a catchy name – “Greening the Blue.”

Developed by the European Climate, Infrastructure and Environment Executive Agency (CINEA), with financial support from the European Union, this program supports various projects that are based on clean energy for maritime applications.

One of the accomplishments of the “Greening the Blue” program was the installation of a sailing system on a ship that claims to be the world’s first theater vessel. The eSail system has been developed by a Spanish company called bound4blue. Other partners involved in the project were the German company Lanitz Aviation, which tested new, lightweight materials for maritime applications, and the Spanish shipyard Astander, which led the installation process.

Bound4blue’s wind-assisted propulsion technology was installed on La Naumon, a vessel designed by Elipsis Onboard and a well-known Spanish contemporary theater company, La Fura dels Baus. Besides reducing CO2 levels, the sailing system will also play an important part in the future artistic performances carried out on board.

“I imagine the eSAIL slowly rising to the magical wind of music, pyrotechnics and light. A trapeze artist with the wings of a butterfly, representing the transformation of renewable and circular energy, will fly anchored at its tip,” said the creative director of La Fura dels Baus, Carlus Padrissa.

eSail is almost 60-foot tall (18 meters), and it includes a tilting mechanism and an autonomous control system. According to the manufacturer, it’s supposed to be quick and easy to install, while helping to increase fuel efficiency and, therefore, cut toxic emissions.

La Naumon, a large floating stage, will be hosting performances that can be watched from the pier or from the beach, while also promoting eco-friendly technologies. 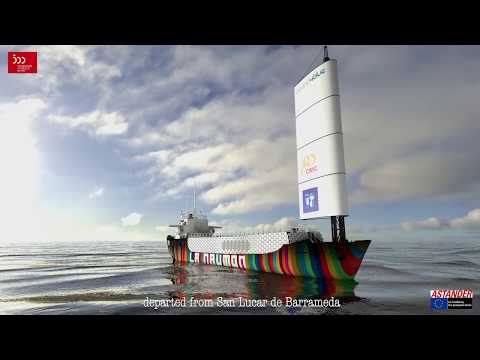