3 Assetto Corsa GT86 Now Has an F1 Engine Inside, Is Good for Giggles Only

World's Fastest Bathtub Takes on the Green Hell, Needs 431 Seconds for a Lap

Disclaimer: I am perfectly sober while writing this story, but I'm not sure the same can be said about the people that came up with the idea of building the world's fastest bathtub. Not that it doesn't sound fun or exciting, but who else would've thought of a vehicle that can provide such an immersive racing experience?
7 photos

The Assetto Corsa modding community never ceases to amaze. Users around the world have been provided with seemingly unlimited creative freedom, and you can spend hours browsing through cars and tracks that they've built. People that are passionate about drifting are especially going to be happy, and I've seen countless pro drifters using Assetto Corsa for training purposes. Just don't forget to invest in a proper racing rig!

The Nürburgring continues to be a source of inspiration and excitement for petrolheads all over the world. And this year, multiple records have been broken there. Speaking about real-life events, Manthey Racing and Porsche have set an impressive record with the 911 GT2 RS. In June, Porsche development driver Lars Kern set a fast lap of 6 minutes and 43 seconds, thus defeating the Mercedes-AMG GT Black Series.

Moving on to the virtual domain, most users are probably somewhat bored of driving fast Porsches on the Nürburgring. After all, you can put in as many laps as you want without having to sell all of your belongings to keep doing so. And that especially applies if you tend to crash a lot. If there's one thing sim racers are going to appreciate, it's an original car mod, even more so if it's going to be a light vehicle.

Enter worldwide acclaimed, fictional company "Wonkersports". Originally known for the development of the Formula Wonk LRS-1, their vision was to turn a Tecpro barrier into a 330-horsepower time attack vehicle. I know guys that have played more than 2,000 hours of Assetto Corsa, so I guess the Formula Wonk is a great way to avoid getting bored with the game. But today, I'm not going to talk to you about the Formula Wonk.

If you're into sim racing yourself, there's a good chance that you've heard about Jimmy Broadbent. Otherwise, you may remember that time he put an F1 engine into a Toyota GT86. He's got a thing for strange cars too. And today, he is driving the world's fastest bathtub. This isn't your average Red Bull Soap Box kind of creation, but instead a highly "advanced" build from Wonkersports.

Their vision was that this kind of vehicle can provide a truly immersive experience, all while allowing you to take a shower on the way to work. According to the official specifications, this thing is powered by a Porsche flat-six engine. That makes for around 220 horsepower and 205 lb-ft (278 Nm) of torque. Adding the driver will take it up to at least 440 lbs (200 kg), which means it will have a power to weight ratio similar to a Koenigsegg.

Jimmy seems quite enthusiastic about taking this bathtub out on the Nordschleife. And let's be honest, who wouldn't be? The moment he gets out on the track, it's obvious that this bathtub is a handful to drive. Even so, it does have a lot of potential given the power to weight ratio. Perhaps a little more aero would have come in handy.

In retrospect, charging at the Flugplatz corner at 142 mph (230 kph) in this contraption is not such a good idea. Even so, after the warm-up, he manages to set a fast lap of 7 minutes and 11 seconds! As Jimmy puts it, "this feels like a 1960s Formula 1 simulator". Now, if you'll excuse me, I'm about to download this dodgy vehicle myself. 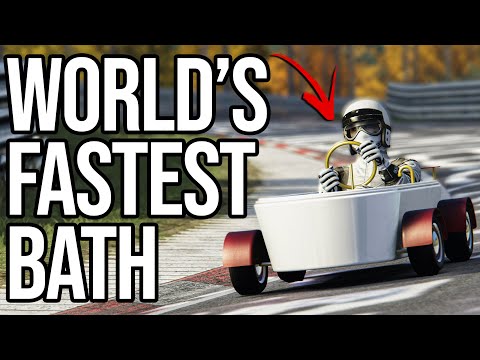