3 In Case You Were Wondering What Future Wars Will Look like, Here’s the Answer

So imagine you are out in the woods, doing what normal people usually do in this environment: walk the dog, look for truffles, try to take a break from the rest of the world or all of the above.
1 photo
She thinks she's miles away from any living being except herself and her dog when she starts to hear this rhythmic whirring sound. Her dog becomes unease, growling and barking in the direction from where all the commotion is coming. She finally manages to spot a humanoid shape walking her way, but she immediately realizes something's not right.

I'm a grown man who isn't afraid of the dark or horror movies anymore, but I still would have felt a cold shiver down my spine if met by this picture during a walk in the woods. Seeing the Boston Dynamics robot approaching with its very linear pace, moving forward as if nothing could stop it, that's enough to either turn around and run or grab the largest branch and hit it until it drops. Which, as a previous clip demonstrated, might not be so easy to accomplish.

Due to the very low quality of the footage, it's hard to tell whether this robot that the guys at Boston Dynamics took out for a walk is the Atlas we know or a new version of it. Whatever it is, it seems to have no problem making its way up the bushy path, followed by a group of enslaved human beings.

Indeed, the humans walk behind it holding its thick power cord as if it were a wedding gown tail. There's also a vehicle that probably also acts as a generator, providing the humanoid robot with the power it needs to keep going forward. On the other hand, judging by the way the robot moves - pretty uncomfortable, with his knees bent at all times and in an obvious hurry - they could be there for the same reason the woman took out her dog. Who knew robots had such needs? 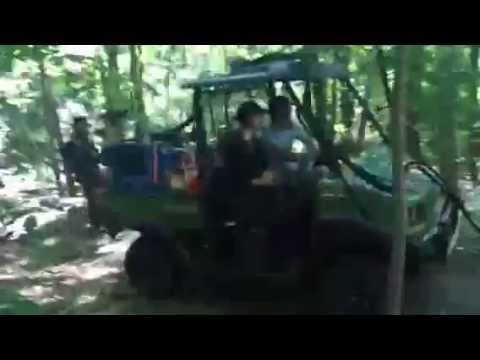