3 Droneboarding Might Become a Thing, but Not before This Kid Has Kids of His Own

4 This Drone Will Drop into Water and Sink on Purpose

In Case You Were Wondering What Future Wars Will Look like, Here’s the Answer

It’s a little comforting to know that there’s an unwritten rule among those who develop weapons of any sort that prevents them from allowing an AI to pull the trigger, but the number of unmanned platforms in use by the military is still scary.
1 photo
It began with the well-known UAVs (thanks, Call of Duty) that can scout behind enemy lines without jeopardizing a soldier’s life, but will also fire missiles from the air if the situation so requires. Instead of disappearing altogether, war is simply becoming more impersonal.

You may remember the Boston Dynamics robot dog that performed a training mission together with the US Marines Corp. That thing is probably as dangerous for the enemy combatants as a Pomeranian puppy, but seeing it rushing towards you will probably have a different effect. That’s mostly because some people believe that every moving thing has a bomb strapped to it.

The army and the bomb squad already use an unmanned, radio-controlled vehicle to inspect and defuse bombs, so the idea of a ground drone to be used on the battlefield isn’t new. What the Milrem THeMIS (Tracked Hybrid Modular Infantry System) brings in the equation is its modularity.

Basically, the THeMIS is a platform attached to two tracks. The smart bit is hiding the battery pack, the diesel engine and the electric generator inside the tracks, freeing the space between them for anything the operator might need. And he’s got plenty to choose from.

The Milrem THeMIS can be equipped with anything from a stretch for evacuating wounded soldiers to a machine gun or even anti-tank weaponry. The armor won’t do much to help the THeMIS in case of enemy fire, that’s why it has to rely on its relatively reduced dimensions - two meters (6’7”) long, 2.1 meters (6’10”) wide and 0.9 meters (2’11”) high - and its maneuverability - top speed of 35 km/h (about 20 mph). With an overall weight of around 800 kg (1,763 lb) and a similar payload, the THeMIS will move fairly quickly on the battlefield, making it the perfect flanking weapon.

It uses a hybrid power drive, but for stealth reasons, it can switch to fully electric for a certain amount of time. The overall maximum operating time is between 8 to 10 hours. Milrem says that the testing phase is completed, and the vehicle will enter production next year. 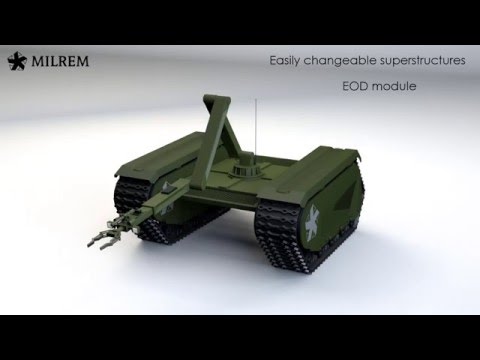